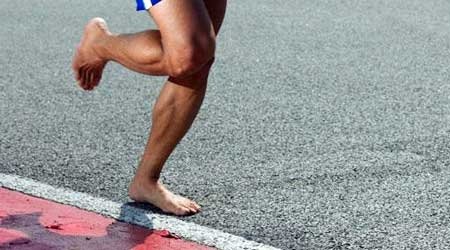 Despite the “media craze” surrounding the potential benefits of barefoot running, it may not be the answer to every stress fracture or shin splint, researchers said.

“Barefoot running is not a panacea,” Daniel Lieberman, chair of the Department of Human Evolutionary Biology at Harvard University in Cambridge, Massachusetts, said.

“The fact is we evolved to run barefoot, but that doesn’t mean it’s the best thing for everybody.”

Lieberman has studied barefoot running but was not involved in the new review.

There are a few theories for why running barefoot may prevent injuries.

There is, as Lieberman said, the idea that humans evolved to run long distances not wearing shoes. Putting on sneakers may alter our natural running form.

Going shoe-less may also lessen the impact on certain parts of the leg and foot and help build foot strength, researchers said. But so far, any benefits remain unproven.

“A lot of people are saying it’s like a miracle cure for injury and you have performance increases,” said Nicholas Tam.

Tam, who led the new study, said he and his colleagues wanted to take a more critical look at the evidence.

“Not many of us kind of ambulate around without shoes on every day,” Tam, from the University of Cape Town in South Africa, told Reuters Health. “We don’t necessarily have those calloused feet and all that kind of stuff.”

Tam’s team said injuries are tied to many different factors, including running mechanics – which vary from person to person.

So it’s hard to definitively say switching to barefoot running could lower any runner’s risk of a particular injury. And studies have come to mixed conclusions.

Even if the net benefit of going barefoot is positive, runners could be in danger of getting hurt while getting used to being shoe-less. For example, case studies show some people have developed stress fractures in their feet while transitioning to barefoot running, the researchers pointed out.

“In addition, it seems that little is known about the process of transitioning to barefoot running, and how to do it successfully and without injury,” she added.

Altman, from University of Pennsylvania in Philadelphia, has studied barefoot running but was not part of the review team.

Tam called the review, published in the British Journal of Sports Medicine, a “starting point” for taking a more evidence-based approach to the question of barefoot running.

For now, runners who are interested in going shoe-less should make the transition gradually, researchers agreed.

“If you’re going to try this you should be cautious and careful,” Lieberman told Reuters Health.

He recommends people start by taking off their shoes and running for a few hundred feet on a smooth, hard surface to see what it feels like. He also said paying attention to running form is especially important for those going barefoot to avoid injuries.

“People shouldn’t be afraid of it, but they should be cautious and skeptical,” Lieberman said.

The review did not look closely at so-called minimalist or barefoot running shoes. Those shoes have little cushioning and are billed to more closely re-create the feel of barefoot running while protecting the feet.

According to Lieberman, even a minimalist shoe can affect mechanics – so wearing one is not the same as going barefoot.