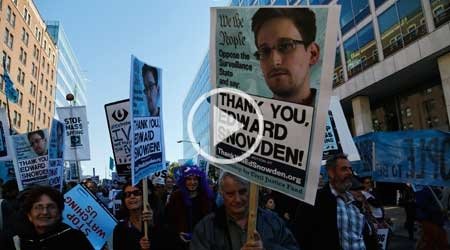 People carried signs reading: “Stop Mass Spying,” “Thank you, Edward Snowden” and “Unplug Big Brother” as they gathered at the foot of the Capitol to demonstrate against the online surveillance by the National Security Agency.

Estimates varied on the size of the march, with organizers saying more than 2,000 attended. U.S. Capitol Police said they do not typically provide estimates on the size of demonstrations.

The march attracted protesters from both ends of the political spectrum as liberal privacy advocates walked alongside members of the conservative Tea Party movement in opposition to what they say is unlawful government spying on Americans.

“I consider myself a conservative and no conservative wants their government collecting information on them and storing it and using it,” said Michael Greene, one of the protesters.

“Over the past several months, we have learned so much about the abuses (of privacy) that are going on and the complete lack of oversight and the mass surveillance into every detail of our lives. And we need to tell Congress that they have to act,” said another protester, Jennifer Wynne.

The event was organized by a coalition known as “Stop Watching Us” that consists of some 100 public advocacy groups and companies, including the American Civil Liberties Union, privacy group Electronic Frontier Foundation, Occupy Wall Street NYC and the Libertarian Party.

The groups have been urging Congress to reform the legal framework supporting the NSA’s secretive online data gathering since Snowden’s disclosure of classified information about the programs that are designed to gather intelligence about potential foreign threats.

The Obama administration and many lawmakers have defended the NSA programs as crucial in protecting U.S. national security and helping thwart past militant plots. They have also said the programs are carefully overseen by Congress and the courts.

Snowden’s disclosures have raised concerns that NSA surveillance may span not just foreign, but domestic online and phone communication.

“We are calling on Congress to take immediate action to halt this surveillance and provide a full public accounting of the NSA’s and the FBI’s data collection programs,” Stop Watching Us said in a letter addressed to members of Congress posted online, calling for a reform of the law known as the Patriot Act.

That law marked its 12th anniversary on Saturday. It was passed in 2001 to improve anti-terrorism efforts and is now under scrutiny by privacy advocates who say it allows “dragnet” data gathering.

“Our representatives in Congress tell us this is not surveillance. They’re wrong,” Snowden said in a statement before Saturday’s rally. Wanted in the United States on espionage charges, he is now in temporary asylum in Russia.

His latest disclosures showed that the United States may have tapped the phone of German Chancellor Angela Merkel, adding to the growing outrage against U.S. data-gathering practices abroad and prompting a phone call between Merkel and President Barack Obama.