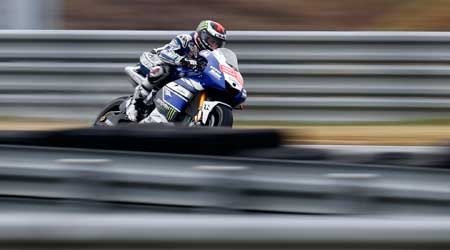 MOTEGI, Japan (Reuters) – World champion Jorge Lorenzo won the Japanese Grand Prix ahead of championship leader Marc Marquez on Sunday to ensure the MotoGP title race will go down to the final round of the season at Valencia next month.

The 26-year-old Yamaha rider rode a brilliant race from pole position, holding off Marquez for 22 laps at the Motegi Twin Ring track and frustrating his fellow Spaniard’s championship ambitions for the second week in a row.

Honda rider Marquez, 20, still leads the championship by 13 points, however, and a fourth place finish at Valencia on November 10 would guarantee he becomes the youngest champion in the 64 years of the premier class of grand prix racing.

Marquez’s 17-year-old brother Alex earlier won the Moto3 race for his first grand prix victory in an action-packed encounter that also kept that title race alive, while Pol Espargaro’s victory in the Moto2 race sealed the championship for the Spaniard.