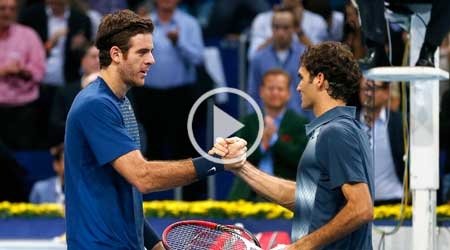 BASEL (Reuters) – Roger Federer’s unhappy season continued on Sunday when he lost to Juan Martin del Potro in the final of the Basel Open for the second year running.

The Swiss played some of his best tennis this year but it was still not enough to stop him from being on the receiving end of a 7-6 (3) 2-6 6-4 defeat against the powerful Argentine and his 220 kph serve.

To add to his woes, victory would have guaranteed Federer a place in the season-ending World Tour Finals but his hopes of qualifying for the tournament he has won a record six times will be decided at next week’s Paris Masters.

After Del Potro took the first set, the momentum seemed to swing Federer’s way when he raced through the second set.

But the turning point came in the first game of the third set when Federer was broken after leading 40-15. Del Potro hit a stunning return on his way to break point and, although the Swiss hero saved one point with an amazing backhand overhead smashed, Del Potro took the game when Federer overhit a forehand.

Del Potro went on to take the set and win his fourth ATP title of the season after Tokyo, Washington and Rotterdam.

Federer, who won his last grand slam title at Wimbledon in 2012 before claiming a silver medal at the London Olympics, has failed to reach the final of a major tournament this season for the first time since 2002.

His only tournament success was at the low-key Halle event and he was beaten in the final at Rome.

He lost in the Australian Open semi-finals to Andy Murray, fell at the last-eight stage to Jo-Wilfried Tsonga in the French Open, suffered a shock second-round defeat at Wimbledon to Sergiy Stakhovsky before losing to Tommy Robredo in the U.S. Open fourth round.