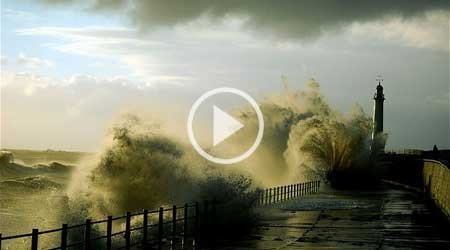 LONDON (Reuters) – Hurricane-force winds are forecast to disrupt road, rail and airport networks on Monday when one of the strongest storms in decades is expected to hit the southern half of Britain during rush-hour, forecasters warned on Sunday.

Local media dubbed the storm “St. Jude”, after the patron saint of lost causes who is traditionally celebrated on October 28, and made comparisons to 1987 when a storm killed 18 people in Britain and felled some 15 million trees.

The storm is expected to bring 80 mph (130 kph) winds and heavy rain to Britain early on Monday morning. The strongest winds could affect commuter routes north of London and across the central region, the Met Office said.

Prime Minister David Cameron chaired a meeting between the Environment Agency, forecasters and government departments on Sunday to discuss contingency plans for the impact of the storm.

Britain’s rail network operator said a revised timetable was already being put in place on some routes while the Highways Agency warned road bridges may need to be closed. London’s main Heathrow airport said it was expecting delays and cancellations.

“The thing that’s unusual about this one is that most of our storms develop out over the Atlantic so that they’ve done all their strengthening and deepening by the time they reach us,” Met Office spokeswoman Helen Chivers said.

“This one is developing as it crosses the UK, which is why it brings the potential for significant disruption … and that doesn’t happen very often.”

The Met Office warned of potential disruption to transport and power supplies.

Storms and strong winds are also expected to hit parts of the Netherlands on Monday, the Dutch Meteorological Institute said.

Amsterdam’s Schiphol airport, one of Europe’s busiest, said the storm could lead to flight delays or cancellations, while the national railway said train services could be disrupted.

In Britain, winds peaked at more than 110 mph when the 1987 storm hit without warning, causing millions of pounds of damage and provoking criticism of Britain’s national forecaster.

The Met Office said advances in forecasting technology had allowed it to predict Monday’s storm well in advance, and that it had started discussions with local councils, emergency services and transport operators early last week.

Last year winds of up to 81 mph hit parts of Scotland in what the Met Office said was Britain’s most severe storm since 1998.