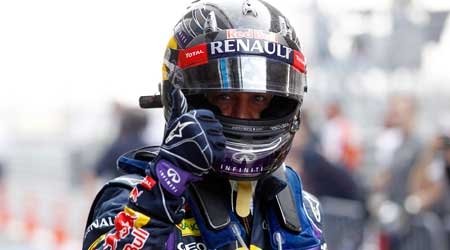 GREATER NOIDA, India (Reuters) – Red Bull’s Sebastian Vettel put himself on pole position for a fourth successive Formula One title after lapping the Indian Grand Prix circuit faster than any driver ever before on Saturday.

The German, whose lightning lap of one minute 24.119 seconds maintained his record of being on pole in every Indian race since the first in 2011, will have compatriot Nico Rosberg alongside for Mercedes on the front row.

It was the 26-year-old’s 43rd career pole and seventh in 16 races so far this season.

Ferrari’s Fernando Alonso, 90 points behind in the standings with four races to go and the only driver who can put Vettel’s title celebrations on hold, qualified only eighth on a hazy afternoon.

Lewis Hamilton will line up third for Mercedes, with Vettel’s Australian team mate Mark Webber starting in fourth place after he and Vettel had been one-two in every practice session.

However, Webber was the only driver on the front two rows to have set his best lap on the slower but more durable medium tyres with the other three opting for softs and sure to pit earlier.

“Obviously Mark is on a different strategy so we’ll see what the race brings tomorrow,” said Vettel, who is chasing his sixth successive win as well as an Indian hat-trick at a circuit where he has led every race lap to date.

Alonso, who must finish in the top two to have any hope of staying mathematically in contention after the weekend, also qualified on the medium tyres.

The big loser was Romain Grosjean, who led the previous race in Japan and has finished on the podium in the last two grands prix but failed to get his Lotus through the first phase of qualifying.

The Frenchman paid a heavy price for going out on the medium tyre when others were lapping on the softs and will start back in 17th.

“We just missed the cut-off time, everyone went quicker than we thought. Today, for some reason, the mediums were not quick enough. It’s a decision we took together, we were confident we could do enough with them but we got it wrong,” he said.