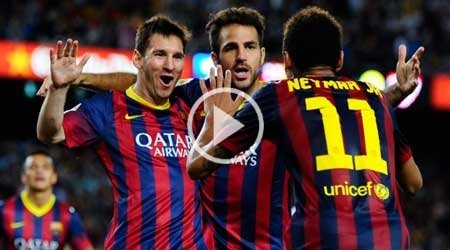 BARCELONA (Reuters) – Neymar stole the show from Lionel Messi, Cristiano Ronaldo and Gareth Bale when his first-half strike set Barcelona on the way to a 2-1 win over Real Madrid in Saturday’s La Liga ‘Clasico’ at the Nou Camp.

In a match watched by hundreds of millions around the world, Barca landed an early blow in the title race thanks to Neymar’s clinical 19th-minute finish and a sublime chip from substitute Alexis Sanchez 11 minutes from time in the 167th league meeting between the world’s two richest clubs by income.

Jese came off the bench to pull a goal back in the first minute of added time but it was little more than a consolation for Real, who were outplayed for long periods and slip six points behind the champions with 10 matches played.

After a predictably cagey opening with few chances, Neymar opened the scoring when he collected the ball from Andres Iniesta on the left of the penalty area.

Cutting inside on to his right foot, he fired off a low shot which took a slight deflection off Real fullback Dani Carvajal before zipping past goalkeeper Diego Lopez into the far corner of the net.

Real battled hard in the second half and Karim Benzema, who replaced Real’s ineffective world record signing Bale on the hour, smashed a shot against the bar before Alexis scored with an exquisite chip over Lopez from just outside the area.

“These are the kind of games when everyone really suffers but I am just happy for the team and for the three points,” Alexis said in an interview with Spanish television broadcaster Canal Plus.

“I don’t think this win will be decisive,” added the Chilean. “There is a long way to go and the championship is not over by any means.”

Unbeaten Barca’s victory, their ninth in the league this season, puts them on 28 points ahead of third-placed Real at the top of the standings.

Second-placed Atletico Madrid are four points behind Barca before their game at home to Real Betis on Sunday.

Real coach Carlo Ancelotti opted for a starting formation that looked to be designed specifically to thwart Argentine World Player of the Year Messi, with captain Sergio Ramos, who normally plays at centre back, operating just in front of central defenders Pepe and Raphael Varane.

Up front, Bale started in the middle, with Ronaldo on the left and Angel Di Maria on the right.

Ancelotti’s Barca counterpart Gerardo Martino deployed Neymar on the left wing and Cesc Fabregas in a forward roving role with Messi in his customary deep-lying position through the middle.

Spain
Banned Granada driver triple the alcohol limit in his fifth breathalyser since JuneA 21-year-old man was arrested this Saturday morning, November 20, by the...