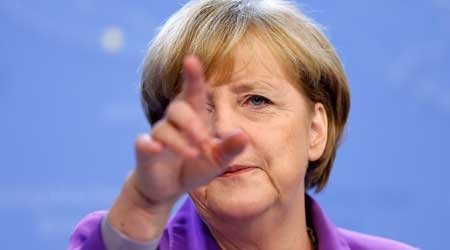 BERLIN (Reuters) – Germany will send its top intelligence chiefs to Washington next week to seek answers from the White House on allegations that U.S. security officials tapped the mobile phone of Chancellor Angela Merkel.

Merkel has demanded action from President Barack Obama, not just apologetic words, following the accusations that the U.S. National Security Agency (NSA) accessed tens of thousands of French phone records as well as monitoring her own private phone.

“We are talking to the Americans to clear things up as quickly as possible,” the German government’s deputy spokesman Georg Streiter said.

“A high level delegation will travel for talks with the White House and National Security Agency to push forward the investigation into the recent allegations,” he told a news conference.

Berlin will dispatch the heads of its foreign intelligence agency BND and of its domestic counterpart, the BfV. Merkel’s chief of staff Ronald Pofalla, who is responsible for the intelligence services, may also join them.

Speaking at an EU summit on Thursday, Merkel said the alleged bugging had shattered trust with the United States. She demanded Washington agree a “no spying” deal with Berlin and Paris by the end of the year, saying alleged espionage against two of Washington’s closest EU allies had to be stopped.

The White House has denied the United States is bugging Merkel, but Washington officials have refused to say whether it did so in the past.

Members of the European Parliament’s civil liberties committee said they will also fly to Washington for talks on Monday and explore “possible legal remedies for EU citizens”.

The rift over U.S. surveillance tactics first emerged earlier this year and had appeared close to resolution, but Berlin said on Wednesday it has obtained information that the United States may have monitored Merkel’s phone.

Earlier this week French newspaper Le Monde reported the NSA had collected tens of thousands of French phone records between December 2012 and January this year.

Only three months ago Merkel’s Interior Minister Hans-Peter Friedrich made a similar visit to demand answers in Washington. The need for another trip has left Germany looking like it was duped and brought fierce criticism of Merkel for not taking a tough enough stance.

State surveillance is a highly sensitive subject in a country haunted by memories of eavesdropping by the Stasi secret police in communist East Germany, where Merkel grew up.

The European Parliament has already opened an inquiry into the effect on Europe of U.S. intelligence activities revealed by former NSA contractor Edward Snowden. It has also led a push for tougher data protection rules and the suspension of a transatlantic data-sharing deal.

The Parliament, with 766 members directly elected from the EU’s 28 member states, voted this week in favour of an amended package of laws that would greatly strengthen EU data protection rules that date from 1995.

The rules would restrict how data collected in Europe by firms such as Facebook, Yahoo! and Google is shared with non-EU countries, and impose fines of 100 million euros (85 million pounds) or more on rule breakers.