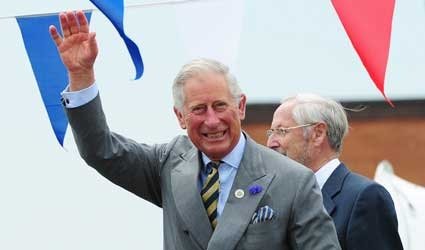 LONDON (Reuters) – Prince Charles’ passion in life is his charitable work and he wants to get as much done as he can before becoming king when, in the words of an aide, “the prison shades” close, according to Catherine Mayer, editor-at-large of the U.S. magazine Time.

After months of research involving rare access to the Prince of Wales, 64, and to several of his residences, as well as interviews with more than 50 aides, friends and critics, Mayer has written a long profile of the heir-to-the-throne in the magazine.

In an accompanying essay giving Mayer’s personal point of view on the prince, available free on the Time website, she seeks to dispel the perception sometimes reflected in media coverage that Charles is impatient to become monarch.

“I found a man not, as caricatured, itching to ascend the throne, but impatient to get as much done as possible before, in the words of one member of his household, ‘the prison shades’ close,” Mayer writes in the online essay.

The aide’s quote was seized on by numerous British newspapers but Mayer told the BBC they had “sexed up” her article and Charles himself had not used the word “prison”.

“Prince Charles’ passion lies with the charitable empire he has built up, and all of his initiatives,” she said.

In his own comments to Mayer, Charles seeks to convey that passion to a sometimes sceptical public.

“We’re busily wrecking the chances for future generations at a rapid rate of knots by not recognising the damage we’re doing to the natural environment, bearing in mind that this is the only planet that we know has any life on it,” he says.

Charles hints at a degree of frustration at not always being understood or trusted by the public, saying that he takes joy in his wife Camilla and his new grandson Prince George, “which is what this is all about”.

He then adds: “It’s everybody else’s grandchildren I’ve been bothering about, but the trouble is if you take that long a view people don’t always know what you’re on about.”

Mayer writes that since 87-year-old Queen Elizabeth has started easing up on her official duties and Prince Charles has been picking up the slack, he accepts these additional duties “joylessly”.

The profile says he believes in the monarchy as a force for good but accepts that people might question its relevance.

“He prefers not to focus on his accession, which, after all, means losing his mother. And far from itching to assume the crown, he is already feeling its weight and worrying about its impact on the job he has long been doing,” the profile says.

In the nuanced and broadly positive article, Mayer points out that Charles has founded more than 50 charities, that he raised 224 million pounds for them in the 12 months to March 2013, and that his flagship Prince’s Trust charity has helped 650,000 young people across Britain over the years.

The profile also reveals colourful snippets of the prince’s life including that he scrunches his toes inside his shoes to stay awake during boring speeches and that some of his aides refer to the rich donors he cultivates as his “Bond villains”.

It also includes a light-hearted quote from actress Emma Thompson, an old friend, who jokes that dancing with Charles is “better than sex”.

Nerja welcomes Christmas with nativity scene and lighting of tree

Axarquía - Costa Tropical
Nerja has welcomed Christmas with a nativity scene and the lighting of a large tree on the Balcon de Europa.Today, December 7, Christmas has...