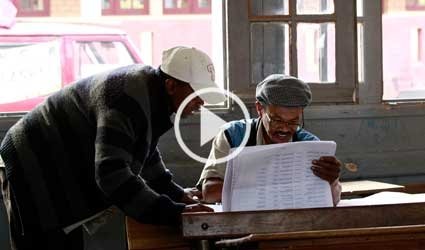 ANTANANARIVO (Reuters) – The people of Madagascar voted on Friday in a presidential election they hope will bring a fresh start, four years after a coup on the Indian Ocean island undermined aid and investment.

Protests and mutinous troops propelled former disc jockey Andry Rajoelina to power in 2009 in the country of 22 million people, famed for its exotic wildlife and threatened rain forests.

Since then, donors have frozen funds, economic growth has slowed and poverty has worsened. Madagascar has struggled to lure back tourists and court oil and mining firms to tap its reserves of oil, nickel, cobalt and gold. Nine out of 10 people live on less than $2 a day.

“We need to end this crisis. As far as I am concerned, this election is our last chance,” said laboratory worker Faly Randrianarivo. The next president, he said, needed to create jobs, fight corruption and ensure free primary education.

In an interview with Reuters, Finance Minister Lantoniaina Rasoloelison said the island would find it hard to meet its spending needs unless foreign donors resumed support within three months of a new president being elected.

Early voting in Antananarivo, capital of the former French colony, was calm and orderly. Short queues built up at polling stations in schools where voters cast their ballots into sealed, transparent containers and then dipped their thumbs in ink.

Rajoelina, 39, is barred by an electoral court from running for president. So too is the wife of the man he ousted, Marc Ravalomanana. With no clear favourite among the 33 candidates, the election is not expected to produce an outright winner, meaning a likely runoff in December.

Results from more than 20,000 polling stations will first be collected in the provinces before being relayed electronically to the electoral commission in the capital. The ballots will then be physically transported across the huge island for a central recount. The commission has until November 8 to announce a provisional result.

“The vote is well organised,” said Madan Dulloo of the Indian Ocean Commission observer team. “I believe the possibility for fraud in the polling stations is minimal.”

Armed police kept a low profile in the capital, where some eligible voters said they had been unable to register.

“We don’t understand why. It’s frustrating. There are many people like me,” said one woman hawking second hand clothes.

Presidential hopefuls have crisscrossed the vast island promising tax cuts, better management of mineral resources and a crackdown on corruption.

Many Malagasy, however, fear the result will be disputed, bringing further turmoil and deterring investors.

“We will take all necessary precautions to avoid anyone causing trouble,” the outgoing president said after voting, without elaborating.

Rajoelina rose to power after galvanising popular anger at Ravalomanana’s perceived abuses of power. He spearheaded violent street protests in early 2009 and toppled the self-made millionaire after dissident soldiers swung behind him.

Diplomats said they were keeping a watchful eye on the military, still headed by a general who backed Ravalomanana’s ouster and whose commanders are seen as loyal to Rajoelina.

The bitter rivalry between Rajoelina and Ravalomanana persists. Both men agreed with regional states not to run for the presidency in order to help restore order, but remain influential in the voting, analysts say.

Ravalomanana, who fled to South Africa and remains there, has openly backed Jean Louis Robinson, a former minister during his presidency and regarded as a serious contender.

Publicly, Rajoelina has not endorsed a candidate. But two aspirants, Hery Rajaonarimampianina, a former finance minister, and Edgard Razafindravahy, are both widely seen as close political associates of the outgoing president.

One Western diplomat said flaws in the voting process were inevitable but that the alternative was another delay. Rajoelina first promised an election in late 2010.

“Everybody knows the vote cannot be perfect but everybody is playing the game,” said Lydie Boka of French risk group StrategiCo. “Given the circumstances, maybe that is the best they can do.”