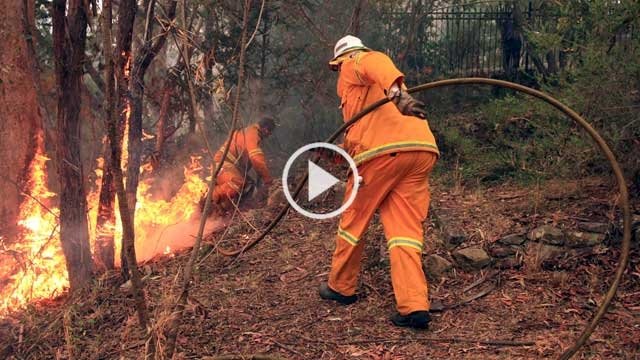 SYDNEY (Reuters) – A plane dousing wildfires in bushland south of Australia’s biggest city, Sydney, crashed into a national park on Thursday, killing the pilot and sparking a new fire to add to 55 still burning across the state of New South Wales.

The accident happened as more dry, windy conditions caused a flare-up in huge fires burning for a week in mountains to the west of Sydney, closing roads and entering a valley running down towards the metropolitan area.

“It’s hard to definitely say that (the worst is over) at this stage,” said Rural Fire Service spokeswoman Natalie Sanders. “We have got cooler temperatures today and the winds are slightly lower but with these fires still going, it’s hard to say how long they’ll go for and whether there will be any further damage.”

Rescue workers were unable to retrieve the body, driven back by high winds, smoke and the rugged terrain.

More than 200 homes have been destroyed in New South Wales since last Thursday, when fires tore through Sydney’s outskirts. A man died from a heart attack as he tried to save his home.

The fires have burned through tens of thousands of acres (hectares) and at one stage had a combined perimeter of about 1,600 km (1,000 miles).

One of the largest blazes was started by a live firing exercise on Army land, the fire service said, prompting an apology from the acting defence chief on Thursday.

Police have arrested several children suspected of starting some fires, while others were sparked by lightening or power lines arcing in strong winds, according to the fire service.

The state government has declared an emergency enabling it to order evacuations, hoping to avoid a repeat of the 2009 “Black Saturday” fires in Victoria state that killed 173 people and caused $4.4 billion worth of damage. Insurance claims from the latest fires have topped $100 million.