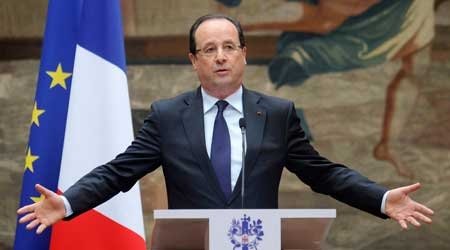 Oct 24 () – PARIS (Reuters) – Four fifths of French voters believe President Francois Hollande will not win the next presidential election in 2017, a poll showed on Thursday, a fresh blow to the leader of the euro zone’s second-biggest economy.

Raging unemployment, anger with tax hikes and rows within his government and party have pushed the Socialist president’s popularity to its lowest since he was elected in May last year.

In a further blow, 76 percent of those surveyed in the Harris Interactive poll for Le Figaro daily and LCP television said they did not see Hollande as someone who keeps his promises and 68 percent did not consider him competent.

In contrast, 54 percent of those surveyed on October 21-22 said they believed hardline Interior Minister Manuel Valls would beat a right-wing candidate in the 2017 presidential election. Only 16 percent said Hollande could achieve that.

In France, the outgoing president traditionally represents his party in the next election and in past decades most, with the exception of former conservative president Nicolas Sarkozy, won a second mandate.

Hollande saw his popularity sink lower after he was widely criticised on Sunday for offering to allow a deported immigrant teenager to return to France but without her family.

Valls has toughened his rhetoric against illegal migration and makeshift Roma camps as the far-right National Front party surged in popularity ahead of municipal and European elections next year.