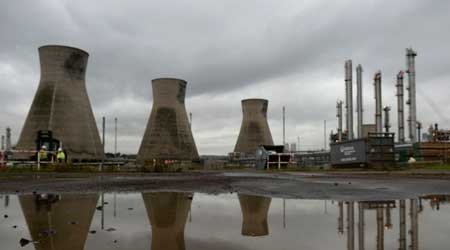 LONDON (Reuters) – Scotland’s economy suffered a blow on Wednesday when the owners of the Grangemouth site shut the petrochemical plant and threatened to close the adjoining refinery, putting 1,400 jobs at risk.

The 210,000-barrels-per-day refinery, which provides most of Scotland’s fuel, was shut last week by its private Swiss owner Ineos due to a long-running labour dispute. The owners say the site makes a loss.

The decision to close the petrochemical plant comes despite the protestations of Prime Minister David Cameron, who had called on all sides to continue talks. The move is also a setback for the Scottish National Party, which is leading the campaign for Scotland to become independent.

On the banks of the Firth of Forth in east Scotland, Grangemouth is one of only seven refineries left in Britain and is the biggest industrial site in Scotland. Around 1,400 staff work at the 7-square-kilometre (2.7-square-mile) site, with 800 of those employed at the chemical plant.

Opened in 1924, it accounts for around 8 percent of Scotland’s manufacturing industry, according to David Bell, a professor of economics at Stirling University.

Ineos said liquidators would be appointed within a week for the petrochemical plant and it would now decide whether to restart the refinery, which would be dependent on the removal of the threat of further industrial action.

“This is the outcome that matches our worst fears,” Scotland’s first minister Alex Salmond said, adding that the Scottish government was trying to find a buyer.

“The Scottish government strongly believes the site has a positive future and we will continue to work with the UK government and all other parties concerned to find a solution that supports the workers affected and the wider Scottish economy.”

Stirling’s Bell said the shutdown of the petrochemicals plant would be the “heaviest blow” for Scotland since the disappearance of a number of electronics companies collectively known as Silicon Glen in the 1990s and early 2000s.


Scotland will vote on whether to become independent in a referendum in September next year. Many Scots polled on the issue have said their biggest concern will be the likely impact a separation would have on the economy.

Ed Davey, Britain’s energy minister, said he stood ready to help with discussions between the management and the union.

The refinery moved closer to permanent closure on Monday this week after a clear majority of union workers rejected a plan that would have cut pensions and benefits.

PetroChina, which owns 49.9 percent of the refinery, said it was aware of the situation at the site, which Ineos operates. Ineos owns completely the attached petrochemical plant.

Grangemouth could be the latest in a line of refinery casualties, including Coryton in Britain – victims of competition from Asia and the Middle East, and falling demand for gasoline in Europe.