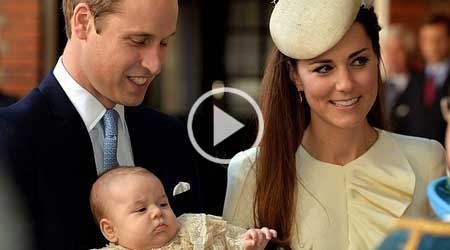 LONDON (Reuters) – Britain’s Prince George was christened on Wednesday in a service attended by just 21 guests, a small and private ceremony for a baby whose parents want to shield him from too much media intrusion.

Prince William, whose mother Diana was hounded by paparazzi and died in a car crash in Paris in 1997, and his wife Kate invited only very close family and godparents to the ceremony in the 16th century St. James’s Palace in central London.

Television pictures gave the public the first glimpse of the baby – third-in-line to the throne – since his parents carried him out of the London hospital where he was born on July 22.

In the arms of his mother as she left the palace’s Chapel Royal, George was dressed in a long cream satin robe that was a replica of an 1841 gown made for the christening of Queen Victoria’s eldest daughter.

Queen Elizabeth, her husband Prince Philip, heir apparent Prince Charles, his wife Camilla, and William’s brother Harry attended the service in which Archbishop of Canterbury Justin Welby baptised the prince with water from the River Jordan.

“George is being brought up in a world very different from Prince William’s childhood but the royal couple really is obsessed by privacy and I hope that does not impinge too much on their lives,” said Ingrid Seward, editor-in-chief of Majesty magazine and author of “A Century of Royal Children”.

The parents named six friends and William’s cousin Zara Tindall as godparents, breaking with the tradition of choosing mostly royal dignitaries, a decision that continued their effort to portray a more informal, modern image to austerity-hit Britons.


Kate’s parents, Michael and Carole Middleton, and her sister Pippa were among the guests. A friend of Princess Diana, Julia Samuel, was one of the godmothers alongside Kate’s schoolfriend Emilia Jardine-Paterson.

Clarissa Campbell, historian of monarchy at Anglia Ruskin University, said scaling back the number of royals at events and putting Prince William and Prince Harry at the forefront had boosted the royal family’s popularity that flagged after Diana’s death and a several royal marriage breakdowns.

“It’s also very much Her Majesty’s wish that the royal family is not seen as an expensive institution in these days,” Campbell told Reuters.

Although the service was held behind closed doors, well-wishers gathered to watch guests drive in and out of the palace commissioned by King Henry VIII.

“We’re dying to see Prince George but I totally respect their decision (for privacy). It’s their child,” said Maria Scott, 42, draped in a British flag, who travelled 300 miles (500 km) from Newcastle in northern England for the day.

Media access to the christening was blocked, with the palace appointing Jason Bell, 44, known for his portraits of rock stars and Hollywood actors, as the sole official photographer.

As well as the christening, Bell was expected to shoot the first portrait of four generations of the royal family in more than 100 years, with the queen and her three direct heirs, Charles, William and George.

A tier of a cake made for William and Kate’s 2011 wedding was to be served at a private tea held after the christening.