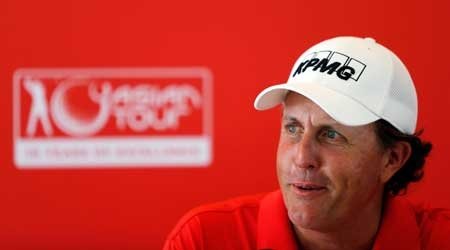 KUALA LUMPUR (Reuters) – British Open champion Phil Mickelson will begin scaling back his tournament commitments next year in a bid to win an elusive U.S. Open title and complete a rare career grand slam, the American said on Wednesday.

Crowd-favourite Mickelson, 43, has won five major championships in a brilliant career but has suffered a heart-wrenching six runner-up finishes at the U.S. Open – the missing piece in his grand slam puzzle.

The big-hitting left hander completed the third leg of his slam bid in July when the hard work he put into improving his driving accuracy paid off with a first British Open title at Muirfield.

Success at next year’s U.S. Open at Pinehurst in North Carolina would make Mickelson the sixth man to win all four majors and emulate the achievements of South African Gary Player and compatriots Jack Nicklaus, Ben Hogan, Gene Sarazen and current world number one Tiger Woods.

“There is no hiding the fact that winning the U.S. Open would be my career goal and completing the career grand slam,” Mickelson told reporters in Kuala Lumpur on Wednesday on the eve of the PGA Tour’s CIMB Classic in Malaysia.

“That is the final leg that I have and I’ll be putting most of my focus into winning the U.S. Open.”

That extreme focus on the majors, mean other less significant events will be sacrificed.

Mickelson has played at least 20 PGA Tour events in each of his last four seasons, while Woods, the winner of 14 majors, played only 16 this year – one of his more active campaigns.

The world number three did not pinpoint which events he would be cutting for the 2014 season, which began at the Frys.com Open in California two weeks ago, but suggested the CIMB Classic might be one.