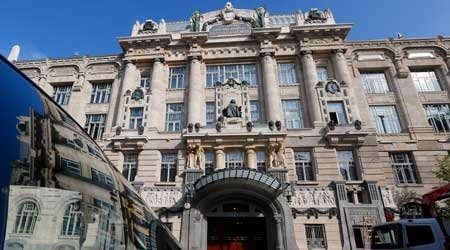 BUDAPEST (Reuters) – Hungary celebrated a rich musical heritage on Tuesday with a gala black-tie concert to mark the refurbishment and reopening of the main concert hall of the Liszt Academy music school in Budapest.

Starting with a rousing brass fanfare to show off the hall’s famously pure acoustics, followed by a Brahms Hungarian dance, a folk song and Bartok violin duos, the programme showed Hungary is a place for music and the Liszt Academy a place to learn it.

Since Hungarian is such a notoriously difficult language, “perhaps we show our talents more in music”, Prime Minister Viktor Orban told the packed audience.

His government brought to term a 10-year project to renew the almost 107-year-old Art Deco building housing the music academy founded by Franz Liszt, the world’s first piano superstar and one of the 19th century’s great composers.

Orban said it was his intention to spend more on the arts and culture “because life is more than a struggle for living”.

Asked by Reuters before the concert began if he thought Budapest, which now will have six major music venues, may perhaps be oversupplied, Orban said: “No, we need even more”.

One of the world’s cherished concert venues, where audience and performers alike praise the acoustics, the Liszt Academy’s “Large Hall” has been painstakingly restored during a four-year closure to its early 20th-century style.

“The starting point was that this building is more than 100 years old and had never been renovated,” said rector Andras Batta, 60, who cedes his post on November 1 to harpist Andrea Vigh.

“Practice rooms were shabby, heating was bad, there was no air conditioning, there were a lot of problems so I thought with such great music and immense possibilities we must grow, we must develop it as one of the 21st century’s great concert halls.”


The hall was reopened on Liszt’s birthday, a day before Hungary commemorates its 1956 failed revolution against Soviet rule. Students will return to the building in February.

The 800-plus students who used to take their classes at the building housing the concert hall have been accommodated at a new building a few blocks away, named for the late Hungarian avant-garde composer Gyorgy Ligeti.

Unveiling a modern statue of Solti placed in front of his alma mater, his widow, Lady Valerie Solti, speaking in Hungarian to end her speech, said: “Solti has come home.”