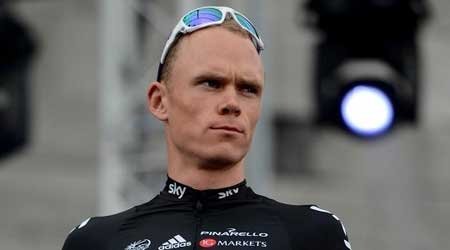 PARIS (Reuters) – Britain’s Chris Froome must successfully navigate a number of traps lurking around a tricky 2014 Tour de France route if he is to retain his title in cycling’s most prestigious stage race.

Starting in northern England on July 5, the Tour features stretches of cobbled roads in northern France, a treacherous crossing of the Vosges mountains and only one time trial – a favourite discipline of Team Sky leader Froome.

“Uncertainty is part of the competition,” Tour director Christian Prudhomme told reporters when asked about the cobbled sections, which could turn the fifth stage into a lottery.

“It would not make sense to avoid the cobbles when we go through northern France,” he added.

But Froome told reporters: “If you know a rider who likes the cobbles, you tell me.”

Team Sky sports director Nicolas Portal told Reuters: “It’s an interesting route, anything can happen, we’ll have to be careful. It’s good for the pure climbers. They (the organisers) made it spicier.

“It is going to be an intense battle every day on every terrain.”

Asked if Froome should fear the cobbles, Portal replied: “Even though he does not have a beautiful style on the bike, Chris is rarely on the ground. He knows how to handle his bike.”

Prudhomme said the 2014 Tour would pay its respects to those who died in World War One as the peloton will ride on the Chemin des Dames and Verdun where many battles took place a century ago.

Should Froome cope with the 15 km of cobbles spread out over nine sections, where his rivals will hope to catch the Team Sky juggernaut off guard on a terrain unlikely to suit them, the Briton will then need to combat three mountain ranges.

They will start in the Vosges, with the 10th stage being “a real mountain stage where the best GC (general classification) riders should fight”, according to Prudhomme.

The stage ends at the top of the Planche des Belles Filles, where Froome triumphed last year.

“In 2012, it came at the end of a hilly stage, this time it will be preceded by several other tough climbs, such as the Petit Ballon d’Alsace and the Col de Chevreres,” Prudhomme added.

There will be five summit finishes, including the demanding climb to Hautacam in the Pyrenees, at the end of a short yet brutal stage also featuring the ascent of the Tourmalet.

A well balanced Tour – which could see sprint king Mark Cavendish don the coveted yellow jersey after the first stage ending in his mother’s home town of Harrogate – may not be decided until the riders race against the clock on the eve of the Champs Elysees parade.

The only time trial will be a 54-km flat route between Bergerac and Perigueux, representing a last chance for Froome to gain time on his rivals if he has been held up along the way.

No rider has retained the Tour de France title since Spain’s Miguel Indurain in 1995.

Alberto Contador, the 2007 and 2009 champion, was stripped of his 2010 title after failing a dope test and Lance Armstrong lost his seven consecutive titles from 1999 after a U.S. Anti-Doping Agency report showed he had cheated his way to glory.