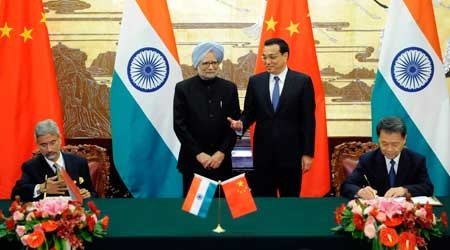 BEIJING (Reuters) – China and India signed a deal on Wednesday aimed at soothing tension on their contested border, as the two nuclear-armed giants try to break a decades-old stalemate on overlapping claims to long remote stretches of the Himalayas.

The agreement was signed in Beijing’s Great Hall of the People following a meeting between Indian Prime Minister Manmohan Singh and Chinese Premier Li Keqiang.

China, a close ally of India’s long-time foe, Pakistan, lays claim to more than 90,000 sq km (35,000 sq miles) disputed by New Delhi in the eastern sector of the Himalayas. India says China occupies 38,000 square kilometres (14,600 square miles) of its territory on the Aksai Chin plateau in the west.

The two countries fought a brief border war in 1962 and since then ties have been mired in distrust, with a series of alleged violations by Chinese military patrols earlier this year.

“I am sure it will help to maintain peace, tranquillity and stability in our border areas,” China’s Li told reporters following talks with Singh.


The border defence cooperation agreement is built on existing confidence-building measures and is designed to ensure that patrolling along the Line of Actual Control, as the unsettled border is called, does not escalate into an unintended skirmish, an Indian official said last week.

Singh said the agreement “will add to the existing instruments to ensure peace, stability and predictability on our borders”.

Under the new deal, the two sides will give notice of patrols along the ill-defined border to ensure that patrols do not “tail” each other to reduce the chance of confrontation and will exercise “maximum self-restraint” should the two sides come face to face in areas where the line of control is unclear.

The two armies, strung out along the 4,000-km (2,500-mile) border from the high-altitude Ladakh plateau in the west to the forests of Arunachal Pradesh in the east, have also agreed to look at setting up a hotline between top-ranking officers in addition to existing brigade-level contacts.

The border defence cooperation pact is a small step forward in a complicated relationship marked by booming economic ties and growing distrust.

In May, armies from the two countries ended a three-week standoff in the western Himalayas after Chinese troops set up a camp at least 10 km (six miles) inside territory claimed by India, triggering a public outcry and calls that India should stand up to its powerful neighbour.

China denied that troops had crossed into Indian territory.

A Chinese airline earlier this month blocked two Indian archers from disputed Arunachal Pradesh from travelling to China, souring the mood in India ahead of Singh’s visit.

But Li sought to play down the differences.

“China and India are two old civilizations,” he said. “Our two peoples have the wisdom and our two governments have the ability to manage our differences along the border so that it won’t affect the overall interests of our bilateral relations.”