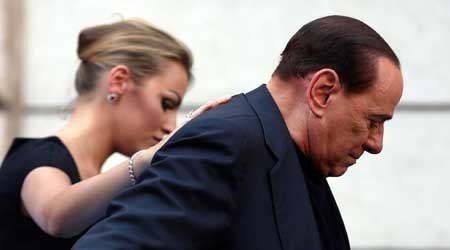 NAPLES, Italy (Reuters) – Silvio Berlusconi was ordered to stand trial for corruption on Wednesday, in a fresh legal blow to the former Italian prime minister following his conviction for tax fraud in August and a string of other cases.

Naples prosecutors accuse Berlusconi of bribing Sergio De Gregorio, a former senator in the small Italy of Values party, to switch allegiance as part of an attempt to bring down the centre-left government of former Prime Minister Romano Prodi in 2006. A preliminary hearing is expected on February 11, 2014.

De Gregorio, who has admitted receiving 3 million euros (£2.55 million) from Berlusconi and attempting to persuade other senators to change sides, was sentenced to 20 months in jail after plea bargaining.

His change of sides in 2006 contributed to destabilising Prodi’s government and contributed to its eventual collapse, but he has since turned against Berlusconi, leader of Italy’s largest centre-right party, the People of Freedom (PDL).

“I believe this issue will speed up the end of a political journey… with Silvio Berlusconi withdrawing from the political scene, freeing Italy and himself,” De Gregorio told SkyTG24 television.

Berlusconi’s lawyer Niccolo Ghedini said in a statement the ruling ordering a trial was “truly extraordinary” and there was no substance to the accusations. He said De Gregorio had changed sides out of genuine conviction, and payments he had received were normal political expenses.

However, the case adds to a long list of legal headaches confronting the billionaire media tycoon, who faces expulsion from parliament and a year of community service or house arrest after he was convicted of being at the centre of a vast tax fraud system at his Mediaset television empire.


Letta survived a confidence motion earlier this month after centre-right rebels forced Berlusconi to retreat from a bid to bring down the coalition, but tensions have continued between hardline Berlusconi loyalists and both the PD and PDL moderates who support the government.

The Senate is expected to vote on stripping Berlusconi of his seat in the upper house under a law banning convicted criminals from parliament.

It is not yet clear when that vote will be held and whether it will come before a separate court ruling banning Berlusconi from holding public office for two years takes effect.

Berlusconi has faced dozens of trials and investigations during his two decades in politics, but he and his supporters have always argued that politically biased magistrates have tried to destroy him.

There was an immediate chorus of support from PDL lawmakers following news of the trial.

“The strategy of a certain section of the magistracy is clear as is its objective. Reform of the justice system is unavoidable,” Mara Carfagna, spokeswoman of the PDL group in the lower house of parliament, said in a message on Twitter.

As well as the tax fraud sentence and the latest trial, Berlusconi is also fighting a separate conviction for paying for sex with a minor and abuse of office in the now-notorious “bunga bunga” case involving former teenaged nightclub dancer Karima El Mahroug, alias “Ruby the Heartstealer”. He has appealed a seven year prison sentence handed down in June.