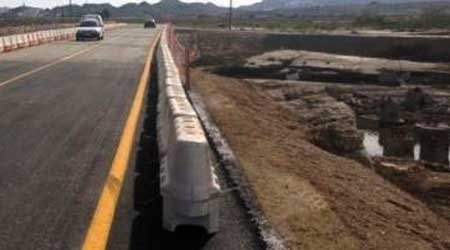 WORK on a new bridge on the Pulpi to Huercal Overa road should be finished by December.

The Department of Public Works of the Junta de Andalucia says workers have completed the placement of concrete beams for the bridge being built over the Rambla del Pinar, on the A350.

The scheme is part of the works to repair damage caused by heavy rain in September 2012.

The structure is 120 metres long, made up of three beams each 40 metres in length.

Work on the A350 is now 85 per cent complete and is running smoothly.

The works, which cost €6 million, affected virtually the entire layout of the road between the junction with the N-340 in Huercal-Overa, and the link with the A1201 Pulpi road.

The A350 was affected along its entire length, and was cut off in several areas.