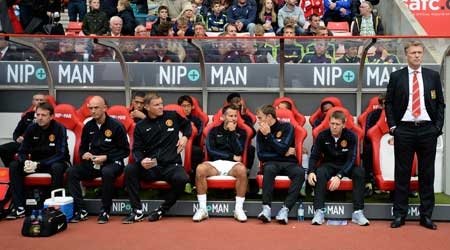 MANCHESTER, England (Reuters) – Manchester United may have to rely on increased noise levels rather than current form to make their home advantage count when they host Real Sociedad in Champions League Group A on Wednesday.

Old Trafford will be trying out a new ‘singing section’ at the stadium, with up to 1,400 of their loudest fans sitting in an area of the ground normally reserved for away supporters in order to improve the atmosphere because the acoustics are better there.

The move should lift spirits at Old Trafford, where a previous reputation as a rock-solid fortress has been shattered with the English champions managing just one win in the Premier League this season.

Their recent European form is little better with four defeats in their previous seven home games.

United are level on four points with group leaders Shakhtar Donetsk after two games before meeting Sociedad, who have no points and are enduring a start to their league season as shaky as that experienced by David Moyes’ men.

“I feel that this is an important one for us,” The United manager said on the club website (manutd.com).

“If we could win this one, it would give us a strong position in the group. We have to go out there and take advantage of the home game and try to get a result.”

United made a flying start in the Champions League, beating Bayer Leverkusen 4-2 at home in their opener but then drew 1-1 in Donetsk.

Conceding in the 89th minute to draw 1-1 with Southampton in the Premier League on Saturday has done little to inspire confidence in the merits of home advantage before facing a Sociedad team who won away from home at the weekend.