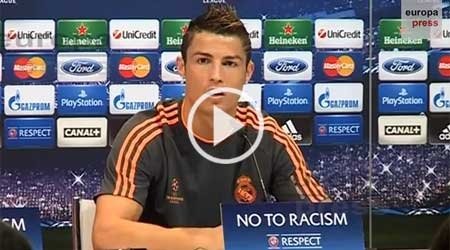 MADRID (Reuters) – Cristiano Ronaldo knows a thing or two about high expectations and the Portuguese forward has urged people not to put excessive pressure on his new Real Madrid team mate Gareth Bale and allow him time to settle in.

Bale succeeded Ronaldo as the world’s most expensive player when he joined Real from Tottenham Hotspur for a fee of 100 million euros (84 million pounds) in the close season but he has barely featured after being sidelined with a thigh strain.

The Wales winger was a second-half substitute in Saturday’s 2-0 La Liga win at home to Malaga, winning a late penalty converted by Ronaldo, and could play in Wednesday’s Champions League Group B clash against Juventus at the Bernabeu.

Lining up against the Italian champions would be the first genuine test as a Real player for the 24-year-old Bale, who scored on his debut in a 2-2 La Liga draw at Villarreal.

“People are putting a lot of pressure on him because of what he cost and all that but I don’t think it’s good for him,” Ronaldo said at a news conference on Tuesday.

“If you want to try to help him don’t put too much pressure on him… leave him alone,” added the 28-year-old, top scorer in Europe’s elite club competition this term with five goals in two appearances.

“He hasn’t had it easy as his pre-season was disrupted and then he got the injury.

“If you talk to him you can tell he is very excited about playing and being part of the team.

“I am 100 percent sure he will be great for the team because he is a fantastic player and a wonderful person. He always wants to learn, which is the most important thing.”

Real coach Carlo Ancelotti confirmed all his players, including Bale, were available for the Juve game with the exception of Spain midfielder Xabi Alonso, who is recovering from a broken foot.

Victory for the nine-times continental champions would give Real a maximum nine points from three matches and put them on the brink of qualification for the last 16 with three group games remaining.

Ancelotti dismissed a reporter’s suggestion Ronaldo and Bale would struggle to fit into the same team.

The right-footed Ronaldo typically operates on the left wing and sets up many of his goals by dashing into the middle, while the left-sided Bale is normally deployed on the right.

“I think that the good players have to play together and it’s good for the team that they play together,” Ancelotti said.

“This debate is not within Real Madrid it is external,” added the Italian, a former Juve coach.

“They have zero problem playing together. One is used to playing on the left, the other on the right so there is absolutely no problem.”