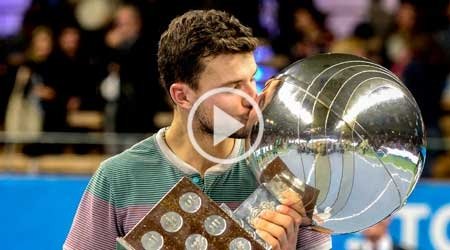 (Reuters) – Bulgaria’s Grigor Dimitrov won his first ATP tour title by fighting back to upset Spanish top seed David Ferrer 2-6 6-3 6-4 in the final of the Stockholm Open on Sunday.

Ferrer, bidding for his third title of the year, got off to a flying start by winning the first set comfortably as both players’ serves faltered.

Dimitrov broke late in the second to force a decider and then staved off two break points that would have put him 4-2 down in the third before battling his way to victory against this year’s French Open finalist.

“Even if I would have lost the match, the most important thing was to test myself to the limits and try to control what I can. This was icing on the cake,” the 22-year-old said on the ATP website (www.atpworldtour.com).