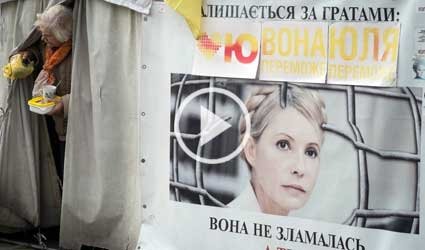 KIEV (Reuters) – Ukrainian President Viktor Yanukovich said he is ready to sign a law to allow jailed opponent Yulia Tymoshenko to go abroad for treatment, in an attempt to clear the way for the signing of a landmark agreement with the European Union.

However, Yanukovich, whose comments were reported on his official web site, made no mention of pardoning his opponent – something the EU has been pressing for in negotiations for her release.

Tymoshenko, 52, his fiercest political rival, was jailed in 2011 for seven years for abuse of office after what the EU said was a political trial which smacked of “selective justice”.

Her imprisonment threatens to block the signing on November 28 of association and free trade agreements between Ukraine and the EU, marking a historic shift towards the west for the former Soviet republic away from Russia.

Yanukovich, in comments to reporters in eastern Ukraine that were confirmed on his web site, said work had begun in parliament on a draft law that would allow Tymoshenko to leave the country for medical treatment.

Tymoshenko has been receiving treatment for spinal problems from German doctors in a hospital in the northern town of Kharkiv where she is held under prison guard.

Yanukovich went on: “Naturally, if parliament adopts this law, I will sign it.”

He appeared to be referring to legislation being prepared by his Party of the Regions, whose deputies dominate in Ukraine’s parliament.

European envoys have asked Yanukovich to grant her a pardon as well as allow her to go to Germany for treatment. Tymoshenko’s daughter said this week that she expected her mother to be in Germany by November 19 under a deal being worked out between Yanukovich and the EU.

Tymoshenko’s supporters want her to be free to return to the political fray and possibly contest the presidential election next February.

But Yanukovich, in his comments on Thursday, did not mention any pardon. He appeared to imply that she would be expected to return to prison in Ukraine after any treatment in Berlin, something that would rule out any political aspirations.

There was no immediate reaction from Tymoshenko’s side.