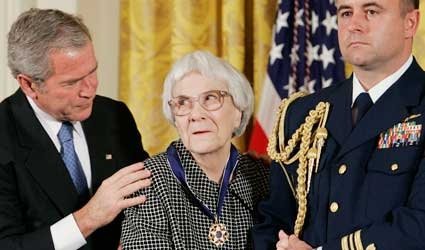 BIRMINGHAM, Ala (Reuters) – An Alabama museum in the town that inspired the setting for the novel “To Kill a Mockingbird” is fighting back against a lawsuit by author Harper Lee that accuses it of exploiting one of America’s best-loved books.

The lawsuit filed last week by the book’s Pulitzer prize-winning author, 87, claims the Monroe County Heritage Museum of illegally profiting from the book. It contends the museum earned more than $500,000 in 2011 by selling goods including aprons, kitchen towels, clothing and coasters emblazoned with the book’s title.

Even the museum’s website is named for “To Kill a Mockingbird,” a novel about small town racism and injustice. The 1960 book has sold more than 30 million copies and has been translated into more than 25 languages.

The 25-year-old museum, located in Monroeville, Alabama, draws thousands of fans each year and includes an old courthouse that served as a model for the courtroom in the movie version of the novel that earned Gregory Peck the Academy Award for Best Actor.

The author has said that the novel’s fictional town, Maycomb, and its courthouse were based on Monroeville.

“Every single statement in the lawsuit is either false, meritless, or both,” the museum’s attorney, Matthew Goforth, told Reuters.

The museum earned only $28,500 from its merchandise sales last year, Goforth said, adding that “every penny of that is being used to further the museum’s mission of educating the public and preserving the area’s history.”

“I find it curious that her handlers suddenly want to profit by suing the museum for essentially preserving and promoting what Ms. Lee helped accomplish for this community,” said Goforth.

“The museum is squarely within its rights to carry out its mission as it always has,” he added.