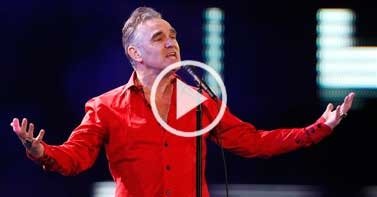 LONDON (Reuters) – British singer Morrissey has divided music fans for more than three decades with his contrarian views. Now he is splitting the literary world after Penguin agreed to publish his autobiography marked a “classic”.

The decision to promote his memoirs under the respected Penguin Classics imprint puts the former lead singer of the Smiths in the company of Oscar Wilde, Thomas Hardy and Virgil.

Morrissey, 54, told the BBC two years ago that he wanted the book, titled simply “Autobiography”, to come out as a Penguin Classic, an imprint started at Penguin with a translation of Homer’s “The Odyssey” nearly 70 years ago.

The publisher’s acquiescence has provoked a debate between devoted fans who think Morrissey’s words on love and loneliness can be nothing but classic, those who think its a joke, and others saying it devalues the Penguin Classics canon.

Eoin Devereux, a senior sociology lecturer at Ireland’s University of Limerick who has written a book about the singer’s cultural impact, said his initial impression was that it was a typical irony-laden, self-deprecating request by Morrissey.

“However after a while I genuinely thought ‘Why not?’,” he told Reuters on Wednesday. “It’s a bold decision by Penguin. Why should the imprint just be for the dead? Morrissey is a classic in all senses of the word.”

Penguin noted on its website that Morrissey had been voted the second-greatest living British icon by BBC viewers behind natural history broadcaster David Attenborough in 2006.

“It has been said ‘Most pop stars have to be dead before they reach the iconic status that Morrissey has reached in his lifetime’,” said the publisher, declining to comment further.

A debate raged on Twitter with Seren Myamoto describing it as “narcissism at its finest”. Beverly Stark said: “Don’t books become classics when they have proved their worth over time?”

Others viewed the issue as a joke, engineered to ensure publicity for the book which hits the shelves on Thursday.

Devereux, who co-wrote the book “Morrissey: Fandom, Representations and Identities”, was confident the book – and Morrissey – would remain as relevant as the literary greats.

“Morrissey is essentially a prose poet,” he said. “His will be a lasting legacy.”

Morrissey, whose songs are rooted in a nostalgic vision of England, was saying nothing on the topic and only planned to hold one book signing in Gothenburg, Sweden, according to Penguin.

He was lead singer of The Smiths, an indie rock band that released “The Queen Is Dead” and three other studio albums between 1984 and 1987, when they split up. He has subsequently been a solo performer.

Seven new outdoor gyms to be created in Mallorca