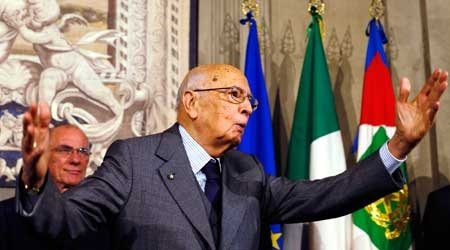 ROME (Reuters) – Italian President Giorgio Napolitano warned political parties on Friday not to change the government’s 2014 budget in ways that would threaten the country’s public finance commitments to the European Union.

“It’s right to have more emphasis on growth, in Italy and in Europe, but not to imagine that there is no longer the problem of consolidating public finances,” Napolitano said in a video link-up with an industrial conference in Naples.

The budget, presented to the European Commission on Tuesday, has been met by a wave of criticism across the political spectrum by parties which have pledged to make major changes during the bill’s passage through parliament.

“We have to work our way out of the crisis one step at a time,” Letta said. “This is a budget that for the first time in many years does not cut health spending or social services, and above all lowers taxes.”

The premier said he would calm heightened tension in the fragile coalition government by talking to former Prime Minister Mario Monti, who resigned from his party on Thursday due to disagreements about the budget, and with Deputy Economy Minister Stefano Fassina who publicly criticised the bill.

“In any case, I am used to living with instability,” Letta said.

Letta’s centre-left Democratic Party and their traditional rivals Silvio Berlusconi’s centre-right People of Freedom party make up the coalition, along with the smaller Civic Choice party, founded by Monti to contest February’s election.

The ruling parties complain about various aspects of the bill but the one criticism they have in common is that a promised cut in payroll taxes is much too timid, saying that Letta lacked the political courage to take more decisive steps.

“We have to be careful about the word courage … We have to avoid that courage which is too easy doesn’t translate into courage that is irresponsible,” Napolitano said.

The 88-year-old said that Italy had this year been allowed to leave the EU’s blacklist of countries with fiscal deficits above 3 percent of output, and it was important that it remained clear of the group of deficit sinners.

The budget, which must be passed by parliament before the end of the year, aims to reduce the deficit to 2.5 percent from a targeted 3.0 percent this year.

Napolitano, who appointed Letta as prime minister in April after an inconclusive February election, is often seen as the ultimate defender and guarantor of the unpopular government.

The budget has been criticised not only by the parties, but also employers’ groups, trade unions and many economists for doing too little to reduce spending, cut the tax burden or otherwise reform the economy to make it more competitive.

Many of these groups are appealing to the parties to make changes, increasing the prospect that the package will be completely overhauled during its passage through parliament, with more emphasis on tax cuts and less on fiscal constraints.

Civil servants, hospital staff and transport workers went on strike against the budget on Friday, with further anti-austerity protests on tap on Saturday. Unions are expected to announce bigger demonstrations next week.

Letta and Economy Minister Fabrizio Saccomanni have stressed they would welcome budget amendments, unlike the usual government inclination to ringfence its legislation as much as possible.

But the political tensions and the government’s weakness could mean budget amendments for larger and unfunded tax cuts, posing a threat to the goal of keeping the fiscal gap below the EU’s ceiling of 3 percent of output.