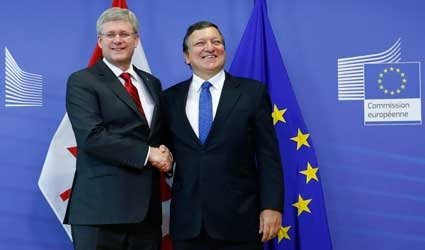 BRUSSELS (Reuters) – The European Union and Canada agreed a multi-billion-dollar trade pact on Friday that will integrate two of the world’s largest economies and paves the way for Europe to do an even bigger deal with the United States.

“This agreement is a landmark achievement for the transatlantic market,” Barroso told a news conference, flanked by Harper. “With political will and a good dose of hard work, there is a way to reach a result that benefits people on both sides of the Atlantic,” he said.

The deal, the European Union’s first with a member of the G8 club of the world’s biggest economies, marks a breakthrough for Brussels’ free-trade agenda that so far has only achieved smaller deals with South Korea and Singapore.

The accord is expected to increase bilateral trade in goods and services by a fifth to 25.7 billion euros (21.6 billion pounds) a year, according to the latest EU estimates.


“This is the biggest deal our country has ever made,” Harper said, adding that it was bigger than the North Atlantic Free-Trade Agreement between Canada, the United States and Mexico.

The European Commission is negotiating trade pacts with more than 80 countries on behalf of the bloc’s 28 members following the collapse of the Doha global trade talks.

Delays to agreeing the Canada pact show how difficult such deals can be.

European efforts to sign a free trade agreement with the United States that would encompass half the world economy faced a setback this month when a second round of negotiations was cancelled because of the U.S. government shutdown.

The Canada agreement should provide a boost for EU trade chief Karel De Gucht and could serve as a template for U.S. talks because both deals seek to go far beyond tariff reduction and to reduce transatlantic barriers to business. There are also similar sticking points such as agriculture.