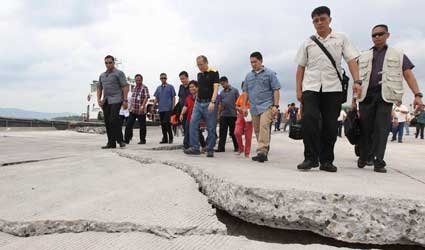 LOBOC, Philippines (Reuters) – The Philippines started to clear roads blocked by debris on Thursday as it reckoned up the cost of this week’s powerful earthquake, with the death toll rising to at least 158.

Tens of thousands of residents of Bohol island, which took the brunt of Tuesday’s 7.2 magnitude quake, remained living outdoors, for fear of aftershocks bringing down damaged homes.

Authorities have recorded more than 1,200 aftershocks including one of magnitude 5.5.

Nearly 17,000 people have yet to return home in the town of Loboc, where the island’s second oldest church, the Church of St Peter, was pulverised in the quake.

“All of them left their houses because of the strong aftershocks,” said Mayor Helen Alaba, who said she had sent out teams of engineers to check if homes were safe.

The national disaster agency said at least 146 of the dead were on Bohol, 630 km (390 miles) south of the capital, Manila. There were 11 deaths on the nearby Cebu islands and another on Siguijor island.

The number of injured reached 374, with at least 22 people missing. The government has declared a state of calamity in Cebu and Bohol, where more than 3.4 million people were affected by the quake. Schools remain closed.


Damage to infrastructure, mostly roads and bridges, was initially estimated at about 179.15 million pesos ($4.2 million), a public works official said.

The quake caused big landslides and wrecked more than 130 schools and 2,000 houses, completely destroying some, besides damaging 34 bridges and nine main roads.

Engineers say at least three bridges in Bohol are structurally unsound and need to be replaced, the public works official said.

“To make these roads passable at the soonest, they will need millions here, to the tune of about 700 million pesos,” said Bohol governor Edgardo Chatto. “We’re not talking of replacements yet.”

After providing food and shelter to victims, restoration of Bohol’s centuries-old churches, usually thronged by tourists, would top the government’s agenda, Chatto said.

Loboc, whose residents depend mainly on tourism for their livelihoods, will need several weeks to recover before it can resume such tourist draws as river cruises and sightings of the world’s smallest primate, the tarsier, a tourism official said.

Some visitors to Bohol have cancelled reservations, but some hotel operators expect tourist visits to resume soon.