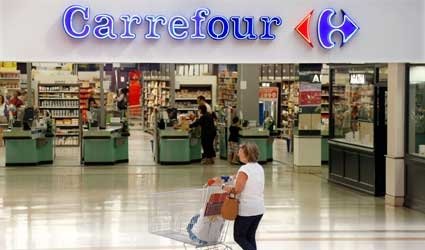 PARIS/BERLIN (Reuters) – Two of Europe’s biggest retailers posted quarterly sales on Thursday that showed turnaround efforts in their home markets were starting to bear fruit and signs the economic climate was slowly improving.

Carrefour <CARR.PA> said sales at its French hypermarkets returned to growth in the third quarter while China also improved, as Chief Executive Georges Plassat made progress in his bid to revive the world’s second-largest retailer.

Metro <MEOG.DE>, Europe’s fourth-biggest retailer which has also been restructuring to respond to sales declines, said it was growing again in home market Germany and was upbeat for the key Christmas period despite a hit to third-quarter sales from volatile foreign exchange rates.

Retail sales in the euro zone rose more than expected in August, raising hopes for a turnaround in a sector that has been hit by weak consumer spending under pressure from rising prices, muted wages growth and high unemployment.

The stronger performance of Carrefour and Metro contrast with disappointing results earlier this month by Britain’s Tesco <TSCO.L>, where falling profits in central and eastern Europe blew a new hole in its recovery plan.

Closely watched same-store sales at its French hypermarkets rose 3.0 percent, reversing a 1.1 percent decline in the second quarter and a 2.9 percent drop in the first and beating analyst forecasts for a rise of 1.5-2.7 percent.

“Overall these third-quarter numbers were very convincing and confirm that the company’s recovery is on track,” said Citi analyst Pradeep Pratti.

Carrefour shares, which trade at a premium to most rivals on 17.5 times forward earnings, were up 2.5 percent at 0709 GMT, while Metro, which has risen sharply in recent weeks on expectations of a turnaround, were down 1 percent.

Carrefour has struggled for years in France, which contributes more than 40 percent of group sales, partly due to a reliance on the hypermarket format it pioneered as time-pressed customers shop more locally and online.

“Our price image and store traffic continues to improve,” Chief Financial Officer Pierre-Jean Sivignon told reporters, adding that all store formats in France had achieved growth in the quarter.

Sivignon said market consensus for 2013 earnings before interest and taxes of around 2.19 billion euros ($2.95 billion) was “reasonable”, provided Latin American currencies did not weaken versus the euro.

However, sales grew 1.8 percent after stripping out the impact of currency effects from Russia, Turkey, India and Japan, as well as divestments like the sale of Real in eastern Europe, accelerating from a rise of just 0.1 percent in the first half.

Chief Executive Olaf Koch took direct control in March of the cash and carry business which accounts for almost half of group sales. The unit reported like-for-like sales growth in Europe and its Asia/Africa division, with Germany showing the strongest rise.

Retail sales in Europe’s largest economy Germany, now waiting for a new government to be formed after an election victory by Chancellor Angela Merkel’s party last month, rose in August for the first time in three months.