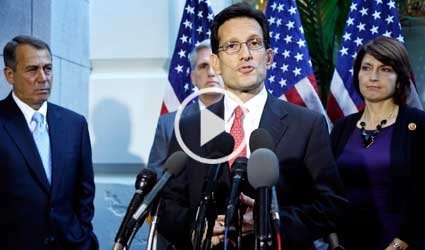 WASHINGTON (Reuters) – The U.S. Senate prepared for a last ditch effort Wednesday to avoid a historic lapse in the government’s borrowing authority, a breach that President Barack Obama has said could lead to default and deliver a damaging blow to the global economy.

After a day of stop-and-go negotiations, the top Democrat and Republican in the U.S. Senate were said to be close to agreeing on a proposal to raise the debt limit – and reopen the partially shuttered government – for consideration by the full Senate on Wednesday.

The measure’s fate remained uncertain in the fractured Republican-controlled House of Representatives, which failed twice Tuesday to produce its own plan.

“This is now back on track,” Democratic Senator Heidi Heitkamp told CNN late on Tuesday, after a day of chaotic developments that frayed the nerves of many members of Congress and global financial markets.

McConnell and Reid resumed stalled talks after a roller coaster day that saw two separate legislative efforts in the House buried after it became apparent too many Republicans were rebelling against their leaders’ plans.

Following weeks of bitter fighting among Democrats and Republicans, the layoff of hundreds of thousands of federal workers and turmoil for stock markets, the deal under discussion – if eventually enacted – would basically give President Barack Obama what he has demanded for months: A straight-forward debt limit hike and government funding bill.

The deal would extend U.S. borrowing authority until February 7, although the Treasury Department would have tools to temporarily extend its borrowing capacity beyond that date if Congress failed to act early next year.

With the final details not yet nailed down, as it stood Tuesday night, the agreement envisioned funding government agencies until January 15, ending a partial government shutdown that began with the new fiscal year on October 1.

Asian stock markets were listless in early trading on Wednesday as they waited to see if Washington was closing in on a deal to resolve the debt crisis. Stocks showed little change and remained near a five-month peak.