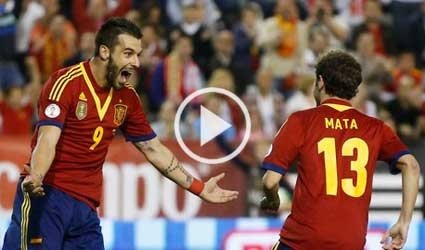 World and European champions Spain secured top spot in Group I with a 2-0 win at home to Georgia thanks to goals from Alvaro Negredo and Juan Mata, finishing three points ahead of the French who beat Finland 3-0.

The victory in Albacete meant the Spanish finished with 20 points from eight matches and, like six other group winners, ended their campaign unbeaten as they seek to become only the third nation to successfully defend the world title.

Negredo, who had scored in their penultimate qualifier last week, shone again for Spain while the man who set up his 26th-minute opener, Andres Iniesta, was delighted to have helped put them through in a city close to where he comes from.

“To seal qualification here, what better place could there be,” Iniesta, who scored the winner that secured Spain’s first World Cup in South Africa in 2010, said in a pitchside interview with Spanish television broadcaster Telecinco.

“Playing here on my home patch they treat me with a special affection. It was a nice day and a nice match to get to Brazil and I am just really happy.”

Substitute Mata pounced on a loose ball and cracked home from close range in the 61st minute to make sure of the victory that extended their unbeaten run at home to 30 matches.

Death threats heard over the phone leads to arrest

News
Death threats heard over the phone leads to arrest. A man who broke a restraining order has been arrested in Barcelona. The accused has...