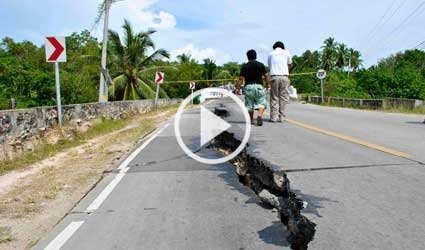 LOON, Philippines (Reuters) – The death toll from an earthquake in the Philippines rose to 144 on Wednesday as rescuers dug through the rubble of collapsed buildings including an old church and a hospital.

Nearly 3 million people were affected by the 7.2 magnitude quake on Tuesday, which caused landslides and widespread damage to infrastructure in the tourist destinations of Bohol island and the nearby Cebu islands.

The number of injured rose towards 300, with at least 23 people missing.

The national disaster agency said at least 134 of the dead were on Bohol island, which took the brunt of the quake. The island is located 630 km (390 miles) south of the capital, Manila.

Officials feared the toll would rise as communications with remote areas were re-established.

“I think this is a growing number,” Loon mayor Lloyd Lopez told Philippine radio. “Yesterday, we had a partial communications block-out.”

“We have not reached all barangays, many are cut off, the roads are blocked by big boulders,” Lopez said, referring to villages.

Mobile phone links from the country’s main provider had been restored but a rival provider still had to fix some of its damaged equipment, a state telecommunications official said.

Many of the millions hit by the quake spent the night outdoors, including patients at some hospitals, because of aftershocks. More than 840 aftershocks have been recorded, with one of magnitude 5.1, the volcanology agency said.

“There are so many aftershocks, we are afraid,” Elena Manuel, a 64-year-old grandmother, told Reuters after her family and neighbours spent the night in the grounds of a centuries-old church that collapsed in Loon, a town of about 43,000 people.

“We don’t have any more food and water because stores are closed, and the bridge … is damaged. After the quake, water and mud came out of cracks on the ground in our backyard.”