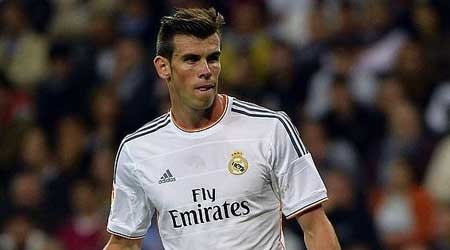 MADRID (Reuters) – Gareth Bale returned to full training with his Real Madrid team mates on Wednesday as he continued his recovery from a muscle injury, suggesting the Wales winger may play a part in Saturday’s La Liga clash at Malaga (3:00 P.M. BST).

Bale became the world’s most expensive player when he joined the Spanish giants from Tottenham Hotspur for a fee of 100 million euro (84.6 million pounds) in the close season but was sidelined by a thigh strain last month.

Real’s internationals were back working out at the club’s Valdebebas training ground on Wednesday and Bale came through a full session overseen by coach Carlo Ancelotti, the club said on their website (www.realmadrid.com).

“Ancelotti had the majority of the internationals at his disposal as well as Bale to prepare for the Malaga game,” Real said.

Bale’s pre-season was disrupted by the drawn-out negotiations over his move and there has been a question mark over his fitness since the deal was concluded.

Real acted quickly to deny a report in Marca sports daily at the weekend that said Bale was suffering from a slipped disc and club president Florentino Perez denounced the newspaper in a television interview.

“The player Gareth Bale has a small chronic disc bulge, which is extremely common among football players and by no means prevents him from carrying out his professional activity normally,” the club said.

Real host Italian side Juventus in the Champions League next Wednesday before playing at arch rivals and La Liga leaders Barcelona in Spain’s ‘Clasico’ on October 26.