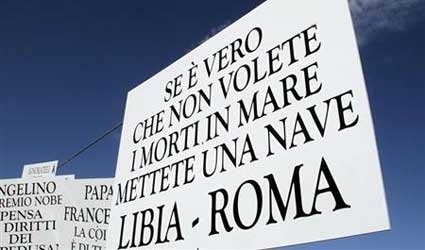 ROME (Reuters) – Italy’s navy rescued about 370 migrants in the waters between Sicily and Libya on Tuesday as the government deployed ships, helicopters and unmanned drones to help avert further shipwrecks that have already drowned hundreds this month.

A naval frigate and a patrol boat brought some 290 people, mostly Syrians, Somalis and Eritreans, to the tiny southern Italian island of Lampedusa after two migrant vessels used satellite phones to dial for help late on Monday, the navy said.

A Panamanian merchant vessel later picked up about 80 people adrift on a large raft in Libyan waters and took them to Sicily, the coastguard said.

The migrant boats risked the dangerous sea passage despite a shipwreck on October 3 that killed more than 360, mostly Eritreans, less than a kilometre from Lampedusa. Last Friday, at least 34 more migrants drowned when their boat capsized, though Italian officials say the true figure may be above 200.

Lampedusa, which lies southwest of Sicily and just 70 miles (113 km) from the coast of Tunisia, has been a stepping stone for migrants seeking a better life in Europe for two decades.

Now the Syrian civil war and unrest in Egypt and other Arab and African countries are fuelling the flow of refugees, many of whom have to pass through an increasingly unstable Libya.

Sicily’s regional parliament declared a state of emergency on Tuesday, a move that allows it to tap additional funds to help its struggling immigration services.

The reception centre on Lampedusa, which is under Sicily’s administration, is now hosting four or five times its capacity.

However, humanitarian organisations say the measures may leave more migrants stranded in the Sahara desert or delivered into the hands of Libyan militias and crime groups, which are known to have beaten, raped and imprisoned migrants in the past.

Libya is the departure point for two thirds of the boats.

Riccardo Compagnucci, head of the Interior Ministry’s immigration office, ruled out Libya as a safe port because of its poor security and human rights situation.

Compagnucci told Reuters some migrants could be taken to “Malta and Greece” in order to facilitate rescue operations, but added: “Libya isn’t safe even for its prime minister.”

Libyan Prime Minister Ali Zeidan was kidnapped for several hours last week. This week, he asked for Europe’s help to stem the flow of migrants.

European Commission President Jose Manuel Barroso was heckled on Lampedusa last week by islanders who said the European Union was partly responsible for the October 3 shipwreck.

Italy and Malta have asked for more EU funds and have called for the migrant emergency to be put on the agenda of the next European Council meeting on October 24-25.