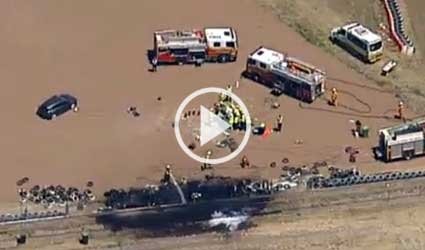 (Reuters) – British racing driver Sean Edwards has been killed in a crash at the Queensland Raceway in Australia.

The 26-year-old, the son of former Formula One driver Guy Edwards, died when the Porsche in which he was a passenger instructing a 20-year-old male, slammed into a wall and caught fire.

Monaco-based Edwards, who was leading the drivers’ championship in the 2013 Porsche Supercup season with one race to go, was taking part in a coaching day at the time, according to Australian news reports.

Edwards had a small role in the recently-released movie Rush, playing his father Guy who helped pull Niki Lauda from his burning Ferrari after a crash at a F1 Grand Prix at the Nurburgring in 1976.

“Shocking news about Sean Edwards passing, top man and super talented racer, condolences to his nearest and dearest,” he said.

Karun Chandhok, a former F1 driver, added on Twitter: “RIP Sean Edwards… Sadly highlights the dangers that instructors put themselves in while helping other drivers.”