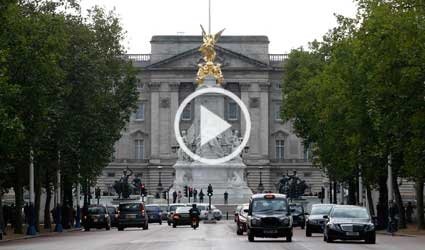 LONDON (Reuters) – Police arrested a man carrying a knife on Monday as he tried to gain entry to Buckingham Palace, the London residence of The Queen, just a month after another security incident at the central London building.

The 44-year-old man was searched then detained on suspicion of trespassing on a protected site and possessing an offensive weapon, a police spokesman said. The man remains in custody at a London police station.

A spokesman for Buckingham Palace said the queen was not in the building at the time and declined to comment further, saying it was a matter for the police.

The palace is only open at limited times to public visitors and police said the man tried to enter via the north centre gate, the site’s busiest entrance for staff and deliveries, shortly before noon. No one was injured in the incident.

It comes a month after police arrested two men over a break-in at the palace, in one of the most serious security breaches there in around 30 years.

One man was found inside the palace and was arrested for burglary, trespass and criminal damage and a second was arrested outside on suspicion of conspiracy to commit burglary. Both were bailed and are due back before police this week.

Two days later, Queen Elizabeth’s son, Prince Andrew, was confronted by armed police in the gardens of the palace and asked to verify his identity. Police later apologised for failing to recognise the prince.

One of the biggest security breaches at Buckingham Palace happened in 1982 when an intruder, Michael Fagan, climbed a wall and wandered into a room where the queen was in bed.