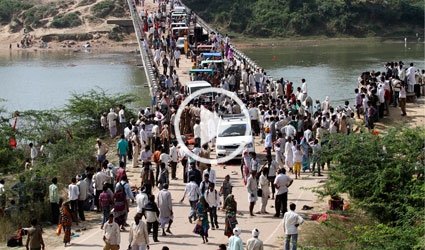 BHOPAL, India (Reuters) – The toll of dead from a stampede at a Hindu temple in India rose to 115 on Monday, police said, as a search ended for more victims of the second deadly crush at the site in seven years.

Nearly 150,000 pilgrims had gathered at the Ratangarh temple in the central state of Madhya Pradesh on Sunday to celebrate the end of the Hindu holy festival of Navratri.

Devotees thronging towards the temple across a long, concrete bridge panicked when some railings broke, triggering the stampede, Dilip Arya, a deputy inspector general of police, told Reuters.

Many victims were crushed by the crowd while others drowned when they fell or jumped into the fast-flowing Sindh river, swollen by heavy rain.

“The death toll has increased to 115 and the rescue operation is over,” Arya said.

Most of the dead were women and children. Many pilgrims were injured and in hospital, Arya said.

Rescuers had combed the river in the hunt for victims.

Reuters images taken soon after the accident showed bodies of women and children on the bridge with discarded travel bags and food and water containers strewn about.

Police were investigating the cause of the accident. Arya dismissed accounts from some survivors that police had sparked the panic by using sticks to try to control the crowd.

Stampedes at religious sites are common in India. In February, a crush at the world’s largest religious festival killed 36 Hindu pilgrims.

The Ratangarh temple was built by Hindu warrior king Chhatrapati Shivaji after defeating the Muslim Mughals, who ruled most of India for 600 years.

There was a stampede on the same 400-metre (440-yard) bridge in 2006 and 50 pilgrims were swept away to their deaths after they jumped into the river to escape the crush.