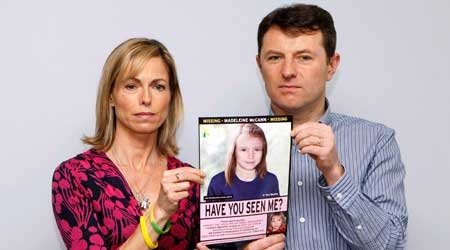 LONDON (Reuters) – Police conducting a global search for Madeleine McCann, the British girl who disappeared in 2007, have pieced together a different version of events surrounding her suspected abduction and wanted to speak to a number of individuals.

McCann, then aged three, went missing from her room at the Praia da Luz holiday resort in Portugal in May 2007 while her parents were dining with friends at a nearby restaurant, triggering a search that gripped the world’s media.

In a statement ahead of their most detailed TV appeal for information on the case, British police said they planned to release a series of e-fit images of individuals they want to question.

“The purpose of the appeal is to try and identify these men, to eliminate any innocent sightings or to establish if they are connected in any way,” British police said.

“The timeline we have now established has given new significance to sightings and movements of people.”

Working with the BBC’s Crimewatch programme, police said they had put together the most detailed reconstruction of the day McCann disappeared.

It is to be broadcast in Britain on Monday before similar appeals are launched in the Netherlands and Germany, they said.

“Our work to date has significantly changed the timeline and the accepted version of events,” Detective Chief Inspector Andy Redwood said, without giving further details.

British police began their own inquiry into the disappearance in July, saying they believe that McCann might still be alive.