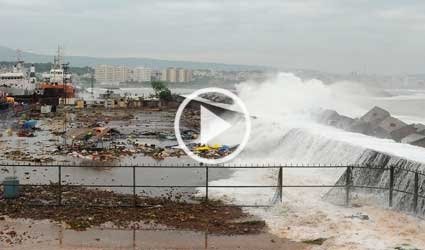 GANJAM/BHUBANESWAR, India (Reuters) – Daybreak revealed a trail of destruction across coastal areas of eastern India on Sunday after the strongest storm to hit the country in 14 years, but the loss of life appeared limited as more than half a million people had taken cover in shelters.

Cyclone Phailin packed winds of more than 200 kph (125 mph) as it made landfall from the Bay of Bengal on Saturday, tearing apart dwellings and uprooting trees, but it lost momentum as it headed inland and was expected to dissipate with about 36 hours.

The government of the state of Odisha said the death toll stood at seven people, all of whom were killed as winds whipped the coast before the storm slammed in, four by falling trees and one when the walls of her mud house collapsed.

The cyclone was one of three major storms over Asia on Sunday. The smaller Typhoon Nari was approaching Vietnam and Typhoon Wipha loomed over the Pacific.

At least 550,000 people in the states of Odisha and Andhra Pradesh spent the night in shelters, some of which were built after a storm killed 10,000 in the same area in 1999. Others took refuge in schools or temples, in what the National Disaster Management Authority called one of India’s largest evacuations.

There had been concern for 18 fishermen who had been out at sea as the cyclone bore down on the coast, but police said on Sunday that all of them had returned safely.

Truck driver Jayaram Yadav, who had been transporting eight cars halfway across India, huddled in the cab of his 28-tonne vehicle as wind howled around him on Saturday night.


“I was just thinking: it’s going to topple over – and then it did,” said Yadav, who survived unscathed as his cargo of vehicles was scattered across a coastal highway.

Television images showed cars flipped on their sides and debris-strewn streets in the silk-producing city of Brahmapur, one of the hardest hit areas. A few trucks and motorbikes returned to city streets as residents emerged to survey the damage.

Winds slowed to 90 km (56 miles) per hour early on Sunday and the rain eased. But large swathes of Odisha, including its capital, Bhubaneshwar, were without electricity for a second day after the storm pulled down power cables. Officials said it was too early to give an accurate damage assessment.

“We will assess after the cyclone eases … even now the cyclone is on,” said Odisha’s chief secretary J.K. Mohapatra. “There has been pretty severe devastation in Brahmapur town.”

Soldiers and rescue workers in helicopters, boats and trucks fanned out across the two states.

Higher sea levels driven by storm surges can cause the worst destruction. Phailin was forecast to drive sea levels up 11 feet (3.5 metres) at its peak.

In Mogadhalupadu, a fishing village in Andhra Pradesh, where some people had refused to leave their boats and nets, the damage was less than feared. Seawater surged into huts made from coconut palms near the beach.

“People have come back to the village now,” said village chief Jagdesh Dasari, saying winds that gusted through the night had dropped off and the rain was light.

Operations at Paradip port in Odisha have been halted since Friday. All vessels were ordered to leave the port, which handles coal, crude oil and iron ore. An oil tanker carrying 2 million barrels of oil, worth $220 million, was moved.

Spain seeks EU pact to woo tourists from UK, France, Portugal & Germany back to its shores from Costa del Sol to Costa Blanca ‘without travel restrictions’