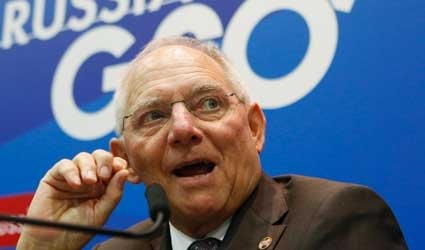 WASHINGTON (Reuters) – Talks to form a German government are on track and the new administration should be in place by mid-November, German Finance Minister Wolfgang Schaeuble said on Saturday.

An inconclusive general election result three weeks ago has left Chancellor Angela Merkel’s conservatives looking for a coalition partner in the form of either the centre-left Social Democrats (SPD) or the left-leaning Greens.

Schaeuble said he expected it to become clear in the coming week who would be the conservatives’ favoured coalition partner and hoped talks could be wound up quickly.

“I believe it will go more quickly than you think. I believe we will have a new government by about the middle of November,” he said at a news conference on the sidelines of International Monetary Fund meetings.

Andrea Nahles, general secretary of the SPD, has said it could take until January to form a new government. A ‘grand coalition’ with the SPD is seen as more likely than an alliance with the Greens.

Schaeuble, who has signalled a desire to stay in his post in the new government, said on Friday Germany was committed to finding a way forward on banking union before the end of the year.