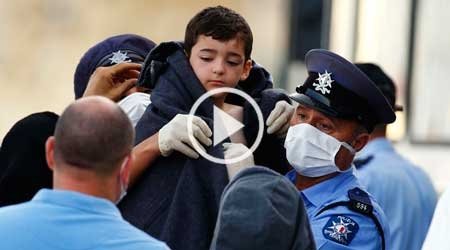 ROME (Reuters) – Italy is to step up naval and air patrols in the southern Mediterranean to try to prevent repeats of the shipwrecks which have drowned hundreds of African migrants this month.

Prime Minister Enrico Letta said late on Saturday an “air and naval package” would be put in place south of Sicily, where tens of thousands of migrants in flimsy, overcrowded boats have made the crossing from Africa so far this year.

Italian officials have been increasingly worried by the uncontrolled arrivals from a region destabilised by the civil war in Syria, chaos in Libya and unrest in Egypt and elsewhere.

“We intend to triple our presence, in terms of both men and means in the southern Mediterranean, for a military-humanitarian mission that has been made necessary in part by the fact that Libya is currently a ‘non-state’,” Defence Minister Mario Mauro told the daily Avvenire newspaper.

He said operational and financial details of the deployment were being worked out and could involve more patrol vessels or more powerful ships with greater surveillance capacity.

“We need strong action to stop these shipwrecks out to sea,” Mauro told the newspaper.

Italian media reported that unmanned drone aircraft based in Sicily could also be used to identify boats in trouble.

In addition to coastguard and frontier police vessels, the Italian navy currently has three vessels supported by four helicopters patrolling the area, and two surveillance aircraft with night vision capabilities in support.

Italy and Malta, which have borne the brunt of the crisis, have asked for more funds from the European Union and called for the migrant emergency to be put on the agenda of the next European Council meeting on October 24-25.

“The fact is that as things stand, we are just building a cemetery within our Mediterranean Sea,” Malta’s Prime Minister Joseph Muscat said in an interview with the BBC.

Libyan Prime Minister Ali Zeidan backed calls for more action from Europe following a meeting with Muscat in Tripoli on Sunday, but the Maltese prime minister said no real progress would be made until order was restored along the African coast.

“To have a permanent solution or at least a better way of dealing with the issue of illegal emigration, there needs to be stability in Libya,” he said.

At least 34 people died on Friday and 206 were rescued when a boat capsized and sank south of Sicily. The incident came just over a week after more than 350 Eritrean and Somali migrants drowned just off the southern island of Lampedusa.

On Sunday, Italian vessels rescued about 400 people from a struggling boat around 60 miles (100 km) south of Lampedusa while another boat carrying around 100 people was picked up by Maltese rescuers, an Italian coastguard official said.

United Nations Secretary General Ban Ki-moon said the international community had to address the root causes of the crisis.

The hundreds of deaths have set off a fierce political debate in Italy over tough rules intended to combat clandestine immigration which make it an offence to offer assistance to illegal migrant boats.

Letta said on Saturday that he favoured changing the law but he faces stiff opposition from centre-right partners in his left-right coalition government who insist the law should stay.

The instability in North Africa and the Middle East has removed many of the controls which previously prevented migrant boats departing, and Europe has long struggled to come up with a comprehensive response.

European Home Affairs Commissioner Cecilia Malstrom has called this week for Europe’s frontier agency Frontex to be strengthened to be able to deploy search and rescue operations in a zone stretching from Cyprus to Spain.

Costa Blanca North
Carlet in Valencia registers 128 litres/m² of rainfallThe weather alert in the Valencian Community was for the imminent arrival of heavy rains and...

News
Airlines from around the globe have demanded that Britain create simpler passenger locator forms for travel into the nation. The Covid-19 pandemic brought in...