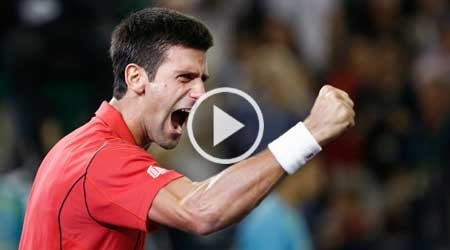 The Serbian triumphed 6-1 3-6 7-6 (3) to complete a brilliant fortnight on the Chinese hard courts after he defended his China Open in Beijing last week. It was the 26-year-old’s 20th consecutive win in China.

After Del Potro defeated world number one Rafa Nadal in Saturday’s semi-finals with some powerful hitting, Djokovic was eager to avoid giving the Argentine any room to find his rhythm in the early stages.

The Serbian took command of the centre of the court, moving his taller opponent from side to side by taking the ball early and pressuring the Argentine’s serve with some crisp, deep returns.

Djokovic broke twice to race into a 5-0 lead before sixth seed Del Potro finally held for the first time to register a game. The Argentine’s first serve percentage dropping to 56 percent as the pressure from Djokovic’s brilliant returning told.

Djokovic quickly wrapped up the set in 34 minutes but a rejuvenated Del Potro fought back gamely in the second, turning the tables on the Serbian with some powerful hitting of his own.

The 2009 U.S. Open champion scored a crucial break early in the set thanks to some booming winners as he opened up a 3-0 lead with an improved serve also providing cheap points.

Djokovic, though, had three chances to break back at 2-4 but the Argentine’s monstrous forehand offered some clean winners as he crucially held before serving out for the set in the next game.

Neither man gave an inch at the start of a tense third set where the hitting intensified as Del Potro sensed his first Masters title.

Del Potro had break point on the Djokovic serve at 2-2 only for the Serb to come up with a huge ace and hold before it was the turn of the Argentine to feel the heat.

More pressure hitting from Djokovic fashioned two break point chances in the next game but Del Potro came up with more forehand winners to hold as the crowd rose in appreciation at the display of the two ATP Tour World finalists.

Djokovic then had two match points at 6-5 only for Del Potro’s forehand to once again dig him out of a hole as he somehow hung on to his serve and forced the tiebreaker.

But the Serbian’s renowned athletic steel finally came through though as Del Potro, who won last week in Japan, finally appeared to tire.

A careless forehand was pushed wide setting up match point which Djokovic took on the first with a backhand winner down the line to seal his 15th Masters title.

Del Potro added: “I am very proud of myself. I did everything, I fought every single point but he is so good and I think he deserved to win.”