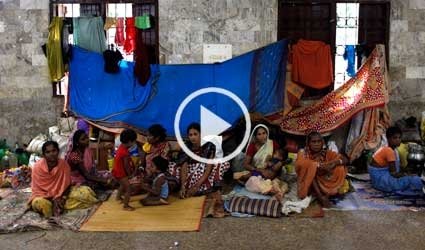 ICHAPURAM/BHUBANESWAR, India (Reuters) – A fierce cyclone tore into India’s east coast on Saturday night, killing at least five people and forcing about half a million into overcrowded shelters as the storm threatened to cut a swathe of devastation through farmland and fishing hamlets.

Cyclone Phailin was expected to remain a “very severe cyclonic storm” packing winds of up to 210 kph (130 mph) into the early hours of Sunday before steadily weakening as it moves inland in the states of Odisha and Andhra Pradesh.

Phailin’s rain and wind could affect 12 million people, weather and disaster management officials said. Some forecasts said the storm lost some of its strength before reaching the coast, but it remained India’s strongest since a typhoon killed 10,000 people in the same region 14 years ago.

Jagdesh Dasari, a local leader in the fishing village of Mogadhalupadu near where the storm struck said police had to order villagers to leave mud and thatch huts for a school building as night fell. Similar hold-outs were reported along the poor coast, where people were afraid of losing belongings.

“Many people refused to move, had to be convinced, and at times the police had to forcefully move them to safe places,” Home Minister Sushilkumar Shinde said.

In the first reported deaths, four people were killed by falling trees, while another died when the walls of her mud house collapsed. Electricity went out in several towns, including Odisha’s capital Bhubaneswar.

“We are fortunate that we are here … we saved our lives,” said Narayan Haldar, huddled with 1,300 people in an Odisha fishing village. He complained the government had not provided food. Some shelters were in dilapidated condition and TV images showed crowds standing in the rain outside one packed building.

Higher sea levels caused by cyclones, known as storm surges, can cause the most destruction. Phailin was forecast to drive sea levels 11 feet (3.5 meters) higher at its peak.

India’s disaster preparations have improved significantly since the 1999 storm and aid workers praised precautions for Phailin such as early warnings, stocking of rations and evacuations.

Some 550,000 people were crammed into makeshift shelters including schools and temples, in what the National Disaster Management Authority, described as one of India’s largest evacuations.

Even before landfall, coconut trees in villages along the coast were bent and broken in the gusting wind. Electrical poles were brought down and roads were littered with debris.

Terrified children clung to their mothers as they sought shelter. Most towns along the coast were deserted but some people were still trying to flee in buses and three-wheel auto-rickshaws just hours before the storm struck.

The size of the storm made extensive damage to property more likely, Shashidhar Reddy, vice chairman of the National Disaster Management Authority told reporters in New Delhi. “Our priority is to minimise loss of life,” he said.

The weather department warned of extensive damage to mud houses, disruption of power and communication lines, and the flooding of railways and roads. Flying debris is another threat.

“A lot has been learnt since 1999 and my guess is that while there could be extensive damage to property and crops, the death toll will be much less,” said G. Padmanabhan, emergency analyst at the U.N. Development Programme.

But despite all the warnings, some people refused to leave.

“I have a small child, so I thought, how will I leave?” asked Achamma, 25, as she held her boy in Donkuru, a fishing village in Andhra Pradesh, as waves crashed on the beach.

The port of Paradip halted cargo operations on Friday. All vessels were ordered to leave the port, which handles coal, crude oil and iron ore. An oil tanker holding about 2 million barrels of oil, worth $220 million (137 million pounds), was also moved, an oil company source said.

But the storm was not expected to hit India’s largest gas field, the D6 natural gas block in the Cauvery Basin further down the east coast, field operator Reliance Industries said.