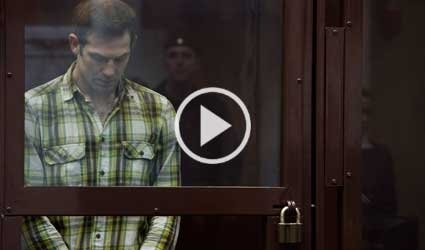 MOSCOW (Reuters) – Two Britons held in Russia for a Greenpeace protest were ordered to remain in pre-trial detention on Friday, a defeat for the first of the many foreigners among the 30 detainees to seek bail.

Freelance videographer Kieron Bryan and Greenpeace activist Phillip Ball, who, like the others, face piracy charges, had appealed against an order that they be held through late November.

The court, in the northern port city of Murmansk, has already denied bail to four Russians held for the September 18 protest in which a Greenpeace ship was boarded by security forces close to an oil rig in the Arctic.

The piracy charges – punishable by up to 15 years’ jail- appear aimed at sending a message that Moscow will not tolerate attempts to disrupt its development of the resource-rich Arctic that Greenpeace says could destroy a pristine environment.

Other countries and companies are seeking to exploit Arctic energy resources and face similar concerns from environmentalists. A Finnish minister resigned on Friday over a row about a Greenpeace protest last year.

Putin has said the activists were not pirates but that they had violated international law. The head of the Kremlin’s advisory body on human rights has said he would ask prosecutors to withdraw the piracy charges.

Kumi Naidoo, head of Greenpeace International, has written to President Vladimir Putin asking to meet him and offering to stand as security in Russia for the release of the activists on bail.

Putin’s spokesman said the letter, published in Western media on Wednesday, had not yet arrived at the Kremlin, and said it unlikely to affect the legal process.

“(Putin) probably cannot get involved in a discussion about the investigative activity that is taking place,” Dmitry Peskov told reporters.

Investigators have said more charges will be pressed against some protesters after drugs and other suspect items were found on the boat, the Arctic Sunrise. Greenpeace denies there were illegal items aboard.

Greenpeace, whose activists tried to scale the Gazprom-owned Prirazlomnaya rig, says the protest was peaceful and calls the piracy charges absurd and unfounded.

In neighbouring Finland, a government minister who had appeared sympathetic to Greenpeace in a separate Arctic protest, resigned.

Heidi Hautala, minister for international development who is also in charge of overseeing state ownership of companies, was criticised by colleagues and the media for trying to dissuade state-owned shipping firm Arctia Shipping from filing a criminal complaint against the protest group.

Hautala, a member of the Green Party, said she thought a state-owned firm should seek dialogue rather than legal action.

“I feel, however, that it would be very difficult for me to work in this role and therefore I see that it is best solution that I resign,” she said.