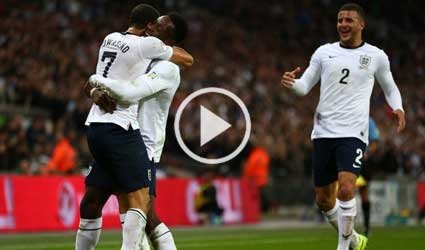 LONDON (Reuters) – A brilliant goal on his debut by midfielder Andros Townsend kept England on course for the World Cup finals as they beat Montenegro 4-1 at Wembley on Friday to remain top of qualifying Group H with one match to play.

A Wayne Rooney strike after 48 minutes, an own goal from Branko Boskovic after 62, a stunning long-range third by Townsend and an injury-time penalty from Daniel Sturridge secured England’s victory.

They lead their section with 19 points, one ahead of Ukraine and four more than Montenegro. Another win at home to Poland on Tuesday will send England to Brazil as group winners, but with Ukraine almost certain to beat San Marino, a draw is unlikely to be enough.

Montenegro appeared to set up a nervous finale when Dejan Damjanovic scored after 71 minutes but England weathered the storm and finished strongly once Tottenham Hotspur’s Townsend produced a goal of class and confidence.

“We agonised over it, I must say, had plenty of discussions and argued things back and forth because on this occasion we had so many players to choose from,” manager Roy Hodgson told ITV of his decision to give Townsend a start.

“To leave people like Jack (Wilshere) and James Milner out of an important game like this wasn’t an easy decision.

“Of course we’re glad it worked out for us. Andros got man of the match and must be delighted with his evening’s work.

“Sometimes you’re lucky with those things, you envisage something and it comes off – but it’s not always that way.”

Rooney opened the scoring three minutes into the second half after a 70-metre run from debutant Townsend, whose cross caused mayhem in the Montenegro defence before Rooney lashed in a left-foot shot from close range.


England doubled their lead in the 62nd minute when Boskovic turned the ball into his own net after a cutback from Danny Welbeck.

Those goals settled an anxious Wembley but Montenegro proved they were not totally down and out when Manchester City’s Stevan Jovetic almost beat his club colleague Joe Hart with a 30-metre shot that smashed against Hart’s crossbar and bounced away to safety.

They did even better in the 71st minute, when Damjanovic diverted a shot from substitute Fatos Beqiraj past Hart to set England’s nerves jangling again.

But Townsend settled them in the 78th minute with a superb shot from 20 metres that swerved past Vukasin Poleksic and went in off the post.

Liverpool striker Sturridge completed the scoring from the spot in the third minute of time added on after he was fouled by Ivan Kecojevic.

“In the first half we were very dominant but it wasn’t easy to find a way past a well-drilled, well-organised Montenegro team,” Hodgson said.

“But we thought if we could just up the tempo a bit around the penalty area and keep making those incisive runs around the area that the goal chances would come. Luckily they did and we scored.

“The 2-1 was a bit of a cold shower for us because we’d had about three chances to go 3-0 up, so we were a bit concerned, but luckily Townsend stepped in and got a great goal for us.”