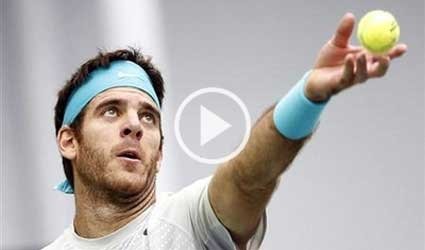 (Reuters) – Rafa Nadal failed to reach a final for only the second time during his incredible 2013 season after being blown off court 6-2 6-4 by Argentine whirlwind Juan Martin Del Potro at the Shanghai Masters on Saturday.

The Spaniard had been hoping to celebrate his return to the top of the world rankings this week by setting up a final showdown for the second time in as many weeks with chief rival Novak Djokovic.

But Nadal, one of the fastest athletes on the tour, found himself outpaced after a breathtaking semi-final display of power and touch by the 2009 U.S. Open champion.

Del Potro barely allowed Nadal, winner of 10 titles this year, a chance as he raced into a 4-0 lead in the first set before bagging it with a scorching ace.

Nadal thought he had broken for the first time to level at 2-2 in the second but Hawkeye disagreed and from then on the world’s best player was chasing shadows as Del Potro produced one of the best performances of his career.

The Spaniard fired a service return long on match point to hand a jubilant Del Potro his first win over Nadal since 2009.

The result condemned French and U.S. Open champion Nadal to his earliest defeat since a shock first-round exit from Wimbledon in June, the only other time this year he failed to reach the final of an event he had featured in.

Death threats heard over the phone leads to arrest

News
Death threats heard over the phone leads to arrest. A man who broke a restraining order has been arrested in Barcelona. The accused has...