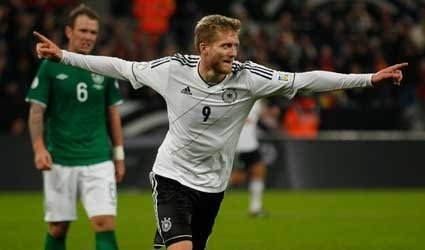 Belgium, boasting one of the most talented squads in Europe, will return to the global showpiece for the first time since 2002 after a 2-1 win in Croatia guaranteed top spot in Group A.

Perennial finalists Germany’s 3-0 home win over Ireland, with goals from Sami Khedira, Andre Schuerrle and Mesut Ozil, put them through from Group C while the Swiss won 2-1 in Albania to wrap up Group E.

Netherlands, with Robin van Persie hitting a hat-trick in an 8-1 demolition of Hungary to surpass Patrick Kluivert as record Dutch scorer with 41 goals, and Italy had sealed their passage to the finals before Friday’s penultimate round of qualifiers.

Holders Spain moved to the brink of qualification from Group I after captain Xavi and substitute Alvaro Negredo struck in a laboured 2-1 win at home to Belarus.

Group F leaders Russia, with a 4-0 victory in Luxembourg, and England, who beat Montenegro 4-1 at Wembley with Wayne Rooney among the scorers, remain in pole position in Group H ahead of Tuesday’s final round of matches.

Victory on a wet night in Zagreb prompted joyous celebrations from the Belgian players in front of a sizeable and vociferous contingent of travelling fans.

“I’m super happy for the team. We always believed we could qualify and now it’s here,” said Lukaku, looking ahead to a party atmosphere in Brussels for their final game against Wales.

The pacey Lukaku broke the deadlock from Steven Defour’s defence-splitting pass and doubled the lead seven minutes before the break, racing away from halfway before lifting the ball over prone keeper Stipe Pletikosa and walking the ball into the net.

Injury-hit Germany, boosted by the return of midfielder Bastian Schweinsteiger after a six-month break to earn his 99th cap, still swept aside Ireland.

“I think overall we played a very good qualification. We won eight of nine so we can be satisfied. Something still needs to happen though. The defence needs to become more stable,” said coach Joachim Loew.

Sweden captain Zlatan Ibrahimovic struck a late winner to earn a 2-1 victory over Austria that secured second place behind the Germans and one of the playoff spots.

The eight best group runners-up advance to a two-legged playoff in November to fill the last four European places.

Goals from Xherdan Shaqiri and Michael Lang clinched Switzerland’s passage with their successful campaign built around a rock-solid defence that has conceded just six goals.

Iceland or Slovenia will finish second in the group.

Iceland, 2-0 winners over Cyprus on Friday, will secure that spot if they can win in Norway on Tuesday while Slovenia, who face the Swiss in Berne, stayed in contention thanks to Milivoje Novakovic’s hat-trick in a 3-0 drubbing of the Norwegians.

Spain’s victory in Palma de Mallorca put them three points clear of France with one match to play and a point against lowly Georgia in Albacete on Tuesday will secure the world and European champions a berth in Brazil.

Russia need a point from their final game away at Azerbaijan to qualify after brushing aside Luxembourg to move three points ahead of Portugal.

A late blunder from goalkeeper Rui Patricio gifted Israel a 1-1 draw in Lisbon to leave Portugal, who led through a first half goal from centre back Ricardo Costa, staring at the playoffs.

England will win their section with victory at home to Poland. Roy Hodgson’s side had to remain patient to overcome stubborn Montenegro who had not lost to the 1966 World Cup winners in three previous meetings.

Rooney, who missed the last two qualifiers through injury, eased England’s nerves when he struck soon after the restart and a Branko Boskovic own goal, a stunning third on his debut by Andros Townsend, and an injury-time penalty from Daniel Sturridge secured victory.

Ukraine remain one point behind and must hope England slip up against the Poles. Andriy Yarmolenko scored the only goal as the Ukrainians edged Poland 1-0 in Kharkiv which all but ended the Euro 2012 co-hosts’ hopes of progressing.

Bosnia, seeking to reach their first major tournament as an independent nation, and Greece remain neck-and-neck on 22 points at the top of Group G after home wins on Friday.

Bosnia, with Edin Dzeko scoring twice, thumped Liechtenstein 4-1 while a Martin Skrtel own goal handed Greece a 1-0 success at home to Slovakia.

Nicklas Bendtner made a sensational return from a six-month ban by netting both goals in Denmark’s 2-2 draw at home to Italy in Group B.

The striker was suspended by the Danish FA after being arrested for drink-driving but his international return was spoiled by Alberto Aquilani’s stoppage-time equaliser.

The Danes remain third, level on 13 points with Bulgaria who had two players sent off in a 2-1 defeat in Armenia.