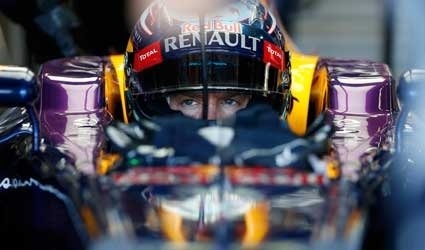 SUZUKA, Japan (Reuters) – Formula One world champion Sebastian Vettel limbered up for a Japanese Grand Prix that could bring him a fourth successive title on Sunday with the fastest time in Friday practice.

The German, who will wrap up the championship if he wins on Sunday and Ferrari’s Fernando Alonso fails to finish in the top eight, lapped with a best time of one minute 33.852 seconds in an afternoon session with plenty of incidents.

Alonso, 77 points adrift of the German with five races remaining, ended the day with sixth and 10th places on the two timesheets.

While Vettel steered clear of trouble, Lotus’s Kimi Raikkonen, Pastor Maldonado for Williams and McLaren’s Sergio Perez all went off in the afternoon.

Perez’s crash was the hardest, with the Mexican slamming sideways into the barriers at the Spoon curve, while Raikkonen went into the gravel half an hour from the end of practice but was still fourth fastest.

First practice saw Lewis Hamilton lead a Mercedes one-two with German team mate Nico Rosberg in a session with four teams filling the top eight places in pairs – with the two Red Bulls followed by the Ferrari and Lotus duos.

Hamilton’s best time of one minute 34.157 seconds was set on the hard tyre on a gloriously sunny morning at the Honda-owned circuit overlooked by its giant Ferris wheel.

The 2008 champion was only sixth in the afternoon.

Vettel, who is chasing his fifth win in a row and has been on pole position in the last three, was 0.611 off the 2008 champion’s pace in the morning.


His Australian team mate Mark Webber, using a new chassis after retiring at last weekend’s Korean Grand Prix with his Red Bull car in flames after being hit by Force India’s Adrian Sutil, was second fastest in 1:34,020.

Vettel has won three of the last four races at Suzuka, a favourite track where he won the 2011 title and can count on the support of a large contingent of local fans.

Ferrari’s Brazilian Felipe Massa, runner-up at Suzuka last year, was faster than Alonso in both sessions.

Australian Daniel Ricciardo, who replaces Webber at Red Bull in 2014, was in the top 10 throughout the day for Toro Rosso.

The main morning incidents came from those well down the pecking order, with Venezuelan Maldonado parking up at Spoon when his left rear wheel came off and bounced away.

Maldonado then went into the barriers in the afternoon at Degner.

Marussia’s French driver Jules Bianchi, who has a fairly meaningless 10 place grid penalty for the race after collecting a third reprimand of the season in South Korea last weekend, and Caterham’s Giedo van der Garde ended up in the tyre wall at Degner.

Bianchi did not take part in the second session with mechanics rebuilding the car.