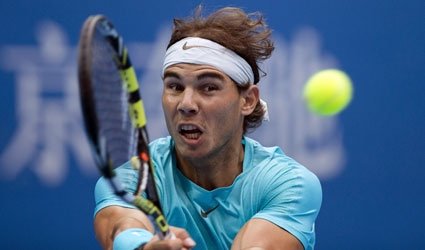 (Reuters) – Top seed and defending champion Novak Djokovic rallied to see off Frenchman Gael Monfils 6-7(4) 6-2 6-4 in the Shanghai Open quarter-finals on Friday and world number one Rafa Nadal also booked his place in the last four.

The Serb, who was replaced by Nadal at the top of the rankings on Monday, defeated Monfils, conqueror of Roger Federer in the previous round, in a match lasting two hours and 23 minutes.

After twice exchanging breaks during the first set, the Frenchman bagged the tiebreak 7-4 to go ahead. But Djokovic fought back, twice breaking Monfils, who had to receive treatment on a stomach muscle.

Djokovic got the crucial break in the seventh game of the third set and closed out the match to set up a semi-final clash with another Frenchman Jo-Wilfried Tsonga.

Nadal was made to work hard in the first set of his quarter-final against Stanislas Wawrinka, triumphing 7-6(10) 6-1 to progress to set up a clash with Argentina’s Juan Martin del Potro.

Wawrinka, who is hoping to qualify for the end-of-season ATP World Tour Finals, saved three break points on his way to a 6-5 lead in the opening set before Nadal saved two set points in the 12th game to take it to a tiebreak which he won.

The Spaniard, who last week lost to Djokovic in the China Open final, then raced to a 5-0 lead in the second set before the Swiss held serve to merely prolong the inevitable as Nadal served out the match.

Del Potro kept his errors to a minimum, breezing past Spain’s Nicolas Almagro 6-3 6-3.

The Argentine, who was suffering from fever during the earlier stages of the hard-court tournament, committed just eight unforced errors during his win and faced a single break point, which he went on to save.

“I like the way I played today. I just want to keep improving (and) keep going far in this tournament.”

Tsonga also took a positive step towards confirming his spot for London with a comfortable 6-2 6-3 win over German Florian Mayer.

World number three Andy Murray’s withdrawal from the Tour Finals due to injury has meant anyone finishing ninth or better in the race to London will qualify for the prestigious season-ending tournament.

Costa del Sol
READING a local feelgood story can improve your day and we received one such tale this week from Alan Boardman of the Simply Surviving...

UK
Sir Tony Blair has come out swinging for the current government in his first speech since the backlash over his knighthood occurred. He said...